Armour for the People

Managed to pick up a couple of extra Airfix Scorpions on ebay. These little beauts are destined to join my rebel forces. 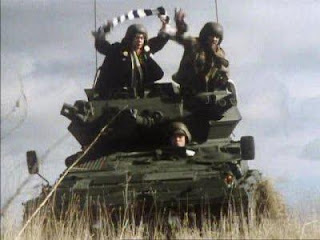 Citizen Smith (Tank Commander)
'The Glorious Day' episode
One will be the armoured contingent from  the Tooting Popular Front ("One word from me and the hills will be alive with the sound of Marxists!"). Need to find an appropriate tank commander figure to give a Donkey Jacket and Tooting FC scarfe.

The other will join a union backed militia armoured column of improvised armoured vehicles similar to the types that appeared during the early stages of the Spanish Civil War (based on commercially available OO scale vehicles). There is still a strong link to the Spanish Civil War in modern day trade union movements and I suspect the influences would have been stronger in 1979 as many of the veterans were in prominent positions within the trade union movement - a prime example being Jack Jones, but also too let's not forget those at the local regional and branch level.

With this theme in mind, Nigel at The Square has a set of modern 20mm Anarchist flags/posters and various revolutionary plus 'national' UK flags to bedeck your forces with displays of revolutionary zeal!