Back in 2009 TQD Castings created a small range of 1/72nd scale 1980's British infantry figures suitable for the Falklands War. But they proved to be as elusive as 'Ginge' Tavish McTavish in a ghillie suit. Well, cover is finally blown and they have been released by C-P Models.

TQD-MF2 BRITISH ARMY INFANTRY
(seperate heads and bergans)
I like the fact that the bergans are separate and you can choose the head options when you order. However, I personally find the style of the figures more suitable for a static diorama than wargame table. Having said that, the Special Forces types in the first pack (TQD-MF1) would make a nice set of characters for Winter of 79 especially if you want a small colourful force - they wear waterproof leggings which could be painted dark red or blue rather than khaki to give that 'irregular', private army or rebel forces look.

At £6.80, for a pack of six miniatures, you pays your money and makes your choice.
Cheers
Mark
Posted by Mark at 22:47 3 comments: 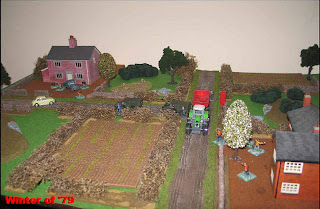 A positive sign that my brain is starting to work again is how Empress Miniatures new Maori Wars range caused my remaining two braincells to spark and go "Ah Ha! These figures are perfect for a Very Victorian Civil War". Yes civil war set in early Victorian Britain - well, you can get bored of DPM!

"Pass the ammunition Mr Pickwick. There's a good chap!"
Could it have happened? A Victorian Civil War? Yes! There were a number of potential flashpoints, including the Chartist uprising in Newport in 1839.

I must confess. The Chartist movement slipped conveniently from my memory after I completed my A levels, way back in the Sixth form (around 1979). Where, it was lost along with all those taught by rote list of dates of when various acts, repeals, laws and prime ministers all came and went. And good riddence too.

There was something Dickensian in these miniatures that appeals to me. And no, not BBC Dickens, think instead of David Lean's Great Expectations (1946) and Oliver Twist (1948) where in black and white you could smell the putrid streets of Victorian London. On top of that I get to utilise Foundry's Opium Wars range, early Victorian low-lifes by Brigade Games and HLBS/Northstar. Plus and here is the BIG bonus - Perry's British Legion from their Isabellino Carlist Wars range. Rules will be a suitably modified Sharp Practice from Too Fat Lardies - DONE!

I had previously been looking at utilising what I have in Winter of 79 terrain for 20mm 1930's style VBCW. It seemed a sensible use of resources but a disaster with some 20mm Britannia WW1 was a reminder that Im not really into Tommy Guns and Cream Teas, and saw me lose any motivation.

If you are a dyed in the wool 'Moderns' C20th gamer and gave up before reading this far - shame on you! It might be that you are also thinking 'where does that leave Winter of 1979?' Well, I've been working quietly behind the scenes and put some wheels in motion.....

Meanwhile, A Very Victorian Civil War whilst appearing to be completely divergent from Winter of '79, and of course it is figurewise,  but it actually reinvigorates me with a fresh perspective and fresh motivation to get back into working on terrain.

Popped into Hobbycraft on the way back from hospital today. They are having a sale which includes the Airfix hardtop Landrover, the Landrover 1tonne Ambulance, the Bedford Refueller and best of all...... 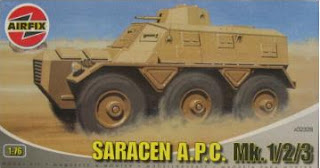 for only £3.99, the Saracen APC! Get yours quick before your local police force snap them up!

Just a quick update to say that my MRI was expedited and I've now had both MRI and EEG scans completed.

Overall, right now Im feeling good after what I can only describe as the lowest of ebbs over the last couple of weeks. Just getting to the stage of having the scans (still awaiting results) has been a welcome relief. As suddenly a damn has burst and hospital appointments with specialists are flooding in thick and fast. To paraphrase Churchill, It is not even the beginning of the end. but it is, perhaps, the end of the beginning.

Please save any well wishes you may have for me and send them instead to my sister - a single mum and a Metropolitan Police officer in London. Commended for her role in the 7 July bombings in 2005, she is in the centre of the current madness and will be part of the thin blue line on the streets again tonight.