Could it have happened? A Victorian Civil War? Yes! It may have been an "age of innovation" according to Asa Briggs but it was far from being a golden age. The early years of Queen Victoria's reign was characterised by socal and economic transformation and unrest. Increased  The 1840's would bring about a rise in working class radicalism, the first stirrings of socialism and a wave of working man and middle class protest that can best be represented I suppose by the Chartist Movement, if we need any sort of MacGuffin as an excuse to game a fictional civil war set in the Victorian era.

Though I must confess that the Chartist movement slipped conveniently from my memory after I completed my A levels, way back when in the Sixth form. It was lost along with all those other learnt by rote dates of when various acts, repeals, laws and prime ministers all came and went. And good riddence too.

Until that is, Empress Miniatures New Zealand War range was releases in 2011, instantly sparking "ze leettle grey cells" as I have always remained a fan of Dickens and have always admired how the Victorian age is brought to life in David Lean's Great Expectations (1946) and Oliver Twist (1948) where you can almost smell the putrid streets of Victorian London. Plus, I regularly dip into Heathers book collection for period flavour as it includes classics such as London Labour and the London Poor and London's Underworld by Mayhew together with Chesney's The Victorian Underworld.

These Empress figures proved to be the embodiment of my vision of the Victorian Chartist age. and well, "actually, it's kind of like champagne that way. The Franciscan monks thought they were making white wine. Somehow the bottle carbonated. Voila, champagne...." Or in this case The Winter of 1839.

This is a mish mash project which is going to make it fun. I'm not being too fussy about the figs. Anything with a suitable 1830's to 1850's vibe will do for us. So, I'm looking at Empress Miniatures; Perry's British Legion from their Isabellino Carlist Wars range as they have figs suitable regulars, militia and deserters/army rebels; Foundry's Opium Wars range for regulars and militia; early Victorian low-lifes by Brigade Games and Armchair General as Chartists; Plus and here is the BIG bonus - Perry ACW rioters as Chartists/agitators; and finally, any suitable Indian Mutiny, Crimean or Victorian fellow that can be crammed in.

Not looking for anything large, just 3-4 'units' per side, a bunch of characters for some "Trubble at' Mill". Rules will be a suitably modified Sharp Practice from Too Fat Lardies - DONE!

I'm not a Victorian uniform buff. Hence my initial  wave of a hand at employing a mish-mash of early Victorian uniforms (multiforms). Trouble is, I did a bit of research. I shouldn't really do that..... it always ends in tears. British army uniforms, especially the infantry largely (largely) remained unaltered from the mid-1830's to 1844. At which point they changed to that we broadly recognise for the Crimean War.

If we set Winter of 1839 around the time of the Chartist Petition in 1848, Crimean War figures would be just right and Winter of 1849 would be perfect m'lud. Now last night I was eyeing up Great War Minis Crimean War figures because both Maff and I have always had a sneaking desire to do 'the Crim', but ever since I saw the inspirational painting Last Stand of the 44th at Gandamuk, by William Barnes Woollen's as a kid, I've wanted British troops in Bell Top Shakos and peaked undress caps. 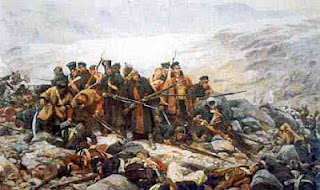 Last Stand of the 44th at Gandamuk

So we may be going for two collections of figures eventually. I stress eventually. In the meantime there's some crossover potential with the more characterful Crimean era figs who could be equally at home in the earlier time frame, eg senior officers, Guards, Highlanders and potentially infantry in pork pie caps (authorised 1834 onwards). But, I'm largely going to stick with the Perry Carlist Wars' British Auxiliary Legion as my main source of 'regular', 'Militia' and similar uniformed figures. In part because the Bell Top Shako and Tam/peaked cap can be used in Canada, China (Opium Wars), Afghanistan, New Zealand/Australia, Cape Wars and Spain, allowing for a greater range of gaming opportunities. 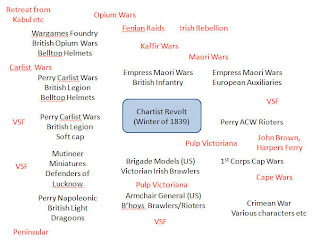 Finally managed to nail British Army uniforms during the Chartist period and more importantly for 1839, which is when I've decided to plant my stake.

In brief, by 1839 the British Army was still very much under the shadow of Wellington and basked in the dimming glory of it's defeat of Napoleon at Waterloo. 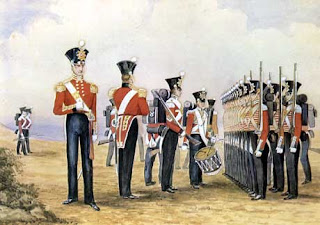 The two biggest changes to the look of the average soldier in a regiment of the line from his counterpart at Waterloo was the Bell-top shako, authorised in 1828, and Oxford Blue trousers with a red stripe (white linen worn May to September).  The most visible departure from the infantry who stood in the mud of Waterloo was that the Grenadier companies and Fusilier regiments wore a bearskin in the United Kingdom and North America.

The cavalry in the years following Waterloo had by and large come to look more like the cavalry of Napoleon than that of the army that had defeated him. Further changes promulgated by William IV who had decided that the entire army should be clothed in red, plus the change from grey overalls to dark blue had a dramatic effect on the look of the light cavalry regiments in the 1830's.

Regular forces of the crown were supplemented by volunteer Militia and Yeomanry, who were uniformed and accoutred in similar fashion to their regular counterparts. Whilst the Militia were in the wane during the 1830's, Yeomanry cavalry continued to play an important role in quelling social and political unrest in the regions from which they were drawn. The Yeomanry in the main copied Light Dragoon and Hussar dress.

Whilst I could easily have winged it regarding the uniforms of the period, I always like to start with a solid base of research before deciding on doing my own thing. Of all the references, Michael Barthorp's two volumes British Cavalry Uniforms Since 1660 and British Infantry Uniforms Since 1660 proved invaluable, allowing me to understand the intricacies of the frequent number of changes to the uniforms and equipment of the British soldier between 1828 and 1854. This makes it easier to choose suitable alternative figures that may be able work with a little imagination or putty work.

The sailing barque Wild Goose, of the Droitwich-Geneva Line, will depart Cobh,

Co Cork, on the 17th this month. Fully laden with a cargo of fine bricks and unmarked

Cork. No time wasters or clergy. 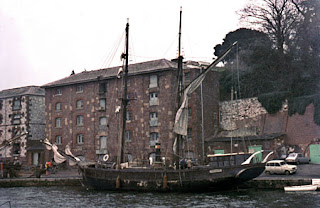 Not mentioned anything in a short while so thought it was time to update on this project. As the title suggests, I've been amassing my Chartist forces. Mostly thanks to Messrs Perry and eBay.

From the Perry's I've bought their American Civil War rioters - the guys throwing bricks being particularly handy. Maff has given me some of his spares plus a set of ACW female rioters (Cheers Mate!) who will fit right in. From eBay, I've managed to buy several assorted lots of Armchair Generals 'Bhoys' 28mm New York Victorian gangs from a UK seller. And I've gradually supplemented them with the odd Foundry Victoriana or Dickensian figure here and there when the price is right.

This week, I found 20 odd Foundry Sikh Wars figures for £14 and bought those. All were wearing the peaked service cap, shell jackets and are in light kit. Perfect for conversions to civilians or leaving as is for Home Service troops in fatigues or even uniformed Chartist militia. I quite fancy such a unit in green jackets with grey trousers as per Chartist colours but am still tinkering with forming a unit of Irish/Army pro Chartists deserters.... these figs at least provide me with options.

I fancy the new Trent Miniatures United Irish insurgent pikemen. Pikes would have been a prominent feature in a Chartist force if push came to shove. Might need to do some headswops but at least the new figs come with separate heads that will make this easy.

Finally, some quick thoughts on Militia and Yeomanry.... the Perry Carlist Wars' Royal Marines are perfect as a local Militia unit, having Bell Top Shakos and importantly, no back packs. They represent the shopkeepers and smiths who have been called out by the local Magistrate to maintain order when theres "Trubble t' Mill".

The Yeomanry were a mounted militia unit formed from the better sort of person. The officers were local gentry and the men came from their tenants and those who otherwise held an obligation to the local laird. Yeomanry were often used as a police force before such existed and were noted for being volatile and vicious when it came to quelling local disorder. 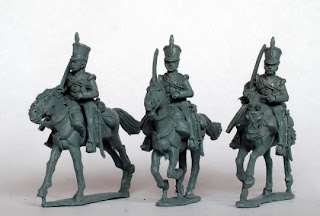 I quite fancy the Perry Isabellino Light Dragoons. They look haughty enough and one can go to town on them with a paint job to make them as fancy as you like.