We've gone dark over the past month as I've taken rooms in the Royal Oak to concentrate on writing about Winter of '79 for Wargames Illustrated. Found these boys posing one day on my return from work. Took a snap with my Instamatic. It was a long cold walk to the chemists to get the photograph developed, what with the buses over crowded due to the petrol shortages and the trains not running. 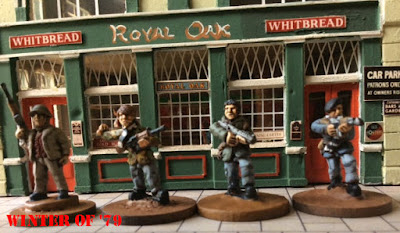 Bob on the left, is the pub landlord. Nice fella. Great egg and chips. Was a Para at Suez. Agrees with Enoch Powell but keeps it quiet unless it's a lock in with the regulars. Thinks his SLR is 'Gods gift to the Empire'. Bill in the Italian camo jacket is a hospital porter. He's on strike. Bit of a leftie, listens to Leonard Cohen and will argue ideological distinctions at the drop of a tuppance, but salt of the earth. Then there's Bob with the Sterling, now he thinks that he's Lewis Collins. In fact he and Bill are a right pair. Benjy on the right has a bit of latino in him. Claims to have been a chef at Marco's Cafe before it went up in flames. Waiter more like. Does a nice coffee though. None of your Maxwell House rubbish. How handy they'll be in a real stand up fight against Maggie's boys from the Mersey and the Thames and the Tyne, I dunno, but they keep the local villains at bay.