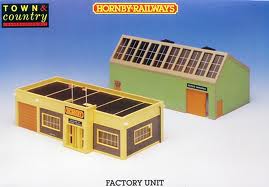 Picked up this OO gauge Hornby Factory Unit on eBay for £12. Some chain link fencing, a parking lot, piles of pipes, a skip or two, wayward pallets and it's an industrial estate in it's own right.

You can extend further with versaitle elements a Portakabin, stacked containers, and add a gatehouse. Knightwing offer plenty of accessories that can populate your scene and give it that grungy 'lived in and worked in' look.

Low relief  industrial buildings can be added to at least two sides to improve the aspect of your playing area whilst increasing it's size with judicial use of additional skips (recommend those from The Scene), piles of oil drums, industrial rubbish and the odd parked van, fork-lift etc.

I previously picked up a Hornby Compressor House that was going for a song at Model Zone. With or without the compressor tank it gives a 1970s look to any industrial estate and also ring the changes. On it's own it can become the centre piece of a Council depot with just a few additional sheds and scatter items from those listed above.Perfect for Winter of 79, Geezers and the odd Zombie apocalypse.. 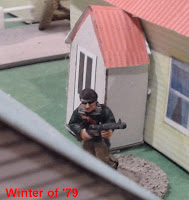 This is the BBC Home Service. Good evening. This evening’s “Radio Drama Hour” is set on the dark and forbidden shore of the Baltic and features Wilton Fulbright as Sven Svensonson and Derek Stilton as Gruber....

1938. The tiny island of Hendrinskaga off the Danish Coast is occupied one night by well armed Nazi sympathisers, led by one Hans Gruber.

The Police Chief on the larger neighbouring island, Sven Svensonson, arms the crew of the Danish trawler Mermaid, and leads them on a mission to place the Nazis under arrest.

Thought up on the train home tonight , the game was a rough and ready playtest of our new homebrew 'Pulp' rules. The rules themselves thought up and expanded via text whilst commuting on the train over the past week. 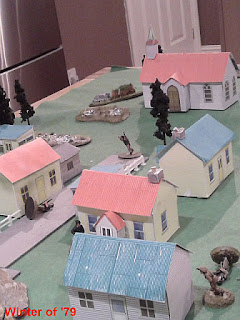 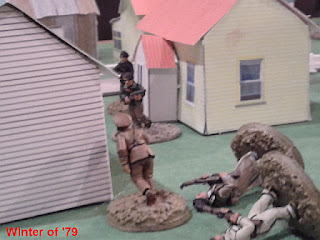 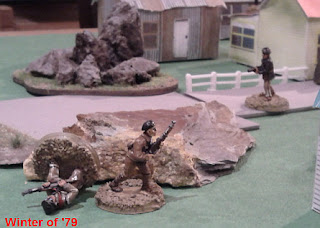 The game was a roaring success and at the end of the night, despite the poor crew of the Mermaid being handed the Herring end of the stick, we had honed our draft rules into a workable and fun little system. Fast play, bloody, with a heroic twist and strong Pulp feel.

That's it! My eyes refuse to stay open for much longer. Back to the Britain of 1979 in a week or two, where there's a bit of a Punk revolution going on.

And there are very bad days! No matter how bad you might think you've had it in the office, spare a thought for Lieutenant Gorman and the Colonial Marines of B Company, 31st Marine Expeditionary Unit. 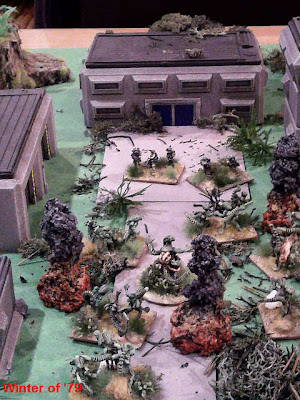 Maff wasn't up for a game tonight, so Heather obliged. In two blistering back to back games, she cleared the Wayland-Yutani base on LV-451 then I took control of the Marines and held off wave after wave of Aliens. Well, that was the plan. 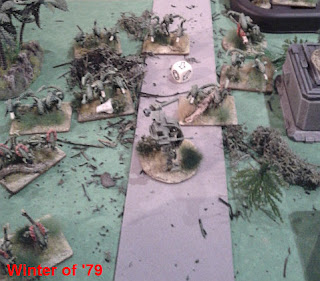 Each Alien surge was met by massive firepower. The Marines were aided by the DIMOG armour suit that remained constantly in the thick of the action. As the Aliens melted away, the Marines moved within their perimeter to bring greater firepower to bear where needed. But they couldn't man all avenues of attack at once and as each Team succumbed to the Aliens, the gaps began to tell, allowing more and more Aliens to close-in.

The DIMOG was overwhelmed by one such surge of Aliens. The operator only managed to score a single hit against the oncoming hordes and the DIMOG was finally clawed to the ground and destroyed by massed Alien attacks. 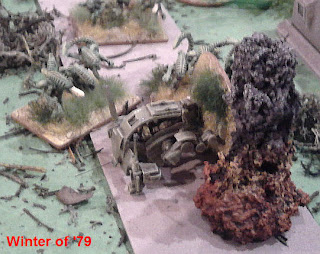 That was an "Oh Shit!" moment for Hudson and Carmen of Alpha Team defending the South Lock. Meanwhile Gorman had retreated to the Control Tower and played little part in the action until the Aliens broke in and ripped Bravo Team to shreds. 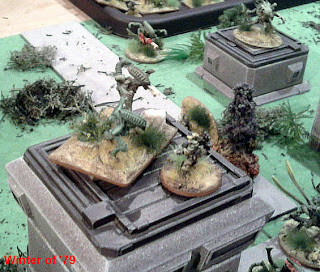 Summoning his reserves of courage Gorman turned into man of the match, taking down one clutch of Aliens after another. But numbers told in the end. Gorman also went down fighting against a forest of teeth and claws. 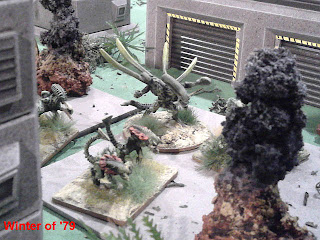 There was nothing in reserve, Hudson then Carmen faced down the bad guys but bad die roll piled on bad die roll. It was all over. For a few minutes there was static but then it was gone. The sub-ether waves went dead. Contact with LV-451 was lost again.

The rules were a back of a postcard job, run up on the train home. Heather loves the Alien movies, especially ALIENS, second in the series. Once I had everything on the table she couldn't resist and by the third wave was fully into the swing of things. Figures are all from Khurasan and the 'Flame' Markers are from eBay seller Small Terrain whom I recommend very highly.

Two great games that proved to be a fun diversion and a welcome return to 15mm Sci Fi, albeit tongue in cheek. Heather enjoyed herself and despite the fact I was to put it bluntly, massacred, in the second game where I played the Colonal Marines, I had a craic! 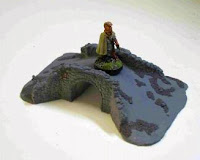 Painting a bridge I bought several weeks back on eBay from Fenris Games. It's perfect as a small back roads stone bridge somewhere in Wales or similar, wide enough (35mm) to take an Airfix 1/76 Scorpion and you could just squeeze a standing 20mm figure under the arch.

The model is 14cm long, lightweight and flawlessly cast. It has been cast in two pieces lengthwise down the centre of the roadway, which gives you the opportunity to widen it without too much effort, should you need to. Better yet, it fits onto one of East Riding Miniatures' medium sized Laser Cut Terrain Templates if you want to create a small stream diorama.

All in all, a lovely little model. It comes in a grey-green resin that to be honest, can be drybrushed and off you go (Maff will like to hear that!). Despite the fact it's now £7.99, given that you could definitely use it for 28mm and even 15mm as well, this small humpback bridge makes for a very attractive and versatile addition to your tabletop.

Cheers
Mark
Posted by Mark at 07:36 No comments:

The London Olympics - simply bloody amazing! You don't have to be a sportsman or woman in any shape or form to have been inspired by some truly wonderful examples of human spirit.

The closing ceremony last night was magnificent. Though it ran a bit like a school disco with the science teacher who fancies himself as a disc jockey in charge of the record player. You know, where everytime everyone is up enjoying themselves, he plays one of 'his' favourites which empties the dancefloor. Jesse J, Eric Idle (showing my age), and of course The Who, made for a cracking finale!

There are two faces to London 2012. The hope and glory of the Games, yet running in parallel, there's also the sad story of Tia Sharp, 12, murdered. Regardless of the procedural rights or wrongs by the Met. They found her body and got the bloke. The 'human error' that prevented them from finding Tia's body straight away, at the end of the day, ensured that Tia's life connected with millions when it could so easily have been just a few column inches of news type lost amongst the daily onslaught of Gold, Silver and Bronze.

I'm glad to have had the opportunity to watch these games. To be inspired. Tia saw the opening ceremony but her life was take before she could enjoy last night's spectacle. Today I woke a different person. 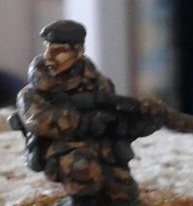 The day job is the main focus at the moment. I'm pulling extra hours as my project nears launch, and by the time I get home, I simply haven't enough capacity left to blog.

Missed CLAYMORE on Saturday. We'd planned to make a weekend of it in Edinburgh, but I couldn't afford to be away from the project. Saturday night though I made a conscious effort to kick back and relax for the first time this week, and so we submerged ourselves in Olympic euphoria.

On the gaming front, Falklands 30th Anniversary passed by with a whimper in 20mm and Pendraken's promised 10mm range failed to materialise? All I can say is WTF?

Maff and I previously discussed buying these Pendraken figs for Falklands and larger scale Winter of '79 engagements. Well, Falklands is off the menu now, and even though the Pendraken 10mm Toms still aren't out yet, with Skytrex's current 20% discount, they may yet prove to be an effective way of wargaming the assault on the Welsh valleys.  Operational level forces for minimal outlay in cost or time. Plus DPM will be easier in 10mm too :-) 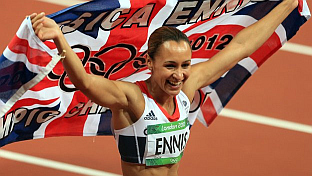 A year on from the London riots, regardless of austerity, corporate greed and internet trolls, we see the very, very best of Britain in one half hour. Ennis, Farrah, Rutherford all win Gold for a total of six Olympic Golds in one day.... it's a tonic for the troops!