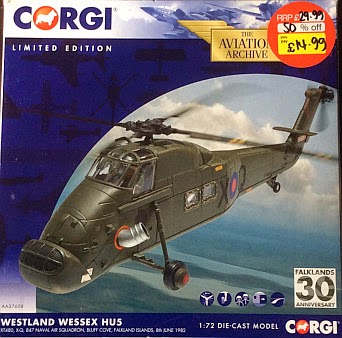 Elhiem is having a 10% off Not Going to Salute Sale - this includes their BAOR and very nice COP5 set of  1970's British TV cops and vilains.

And completely by chance, I found that HMV have bought much of Model Zone's old stock and selling it in store. I picked up this Corgi 1:72 Westland Wessex HU5 for just £14.99! These normally retail at around the £50 mark. Even Model Zone were selling it at £29.99 in the final days of their clearance before closing. Heather had tried to buy one of these for my birthday whilst Model Zone was still very much on the go and was just met with a wall of indifference. Result!

Best of luck finding your own bargains.

Cheers
Mark
Posted by Mark at 09:09 No comments:

Back in the day, I played a lot of D and D and much of it in the City State of the Invincible Overlord; as a DM I ran a few games in the surrounding Wilderlands of High Fantasy. I still have the Wilderland map and can trace the route the party took as you filled in the player map as you went along. One place they visited was Haghill - I ran it with undead berserkers attacking them in the Tavern and black clad riders stalking them along the road; its only reading the game background now that I appreciate what a nasty piece of work the Squire, Huberic, was. So.....with a new copy of Song of Blades and Heroes, some nicely painted Citadel Feudals, some skeletons and a pre painted vampire, it seemed like a good idea to try to do something vaguely related to CSIO and Wilderlands and so, without further ado, here is a tale of horror......


Ambush on the Rorystone Road!

Huberic's retinue are marching up the Rorystone Road looking for peasants to tax when a creaking noise from the undergrowth warns them that the undead are upon them. One skeleton lumbers forward and is chopped down by the soldier in the lead. Another tries the same trick and is cut down. Seizing the initiative, Huberic sends the retainer forward but he is killed messily by a skeleton. Seeing this, most of the retainers, including Ochall Cateye, the "trusted lackey" run for it. Huberic stands his ground - odd for a coward - but he has a crossbow of speed and uses it to kill or knock over three advancing skeletons. He then calls his remaining retainers forwards to take the attack to the undead but the Haghill troops are inveterate looters and being greedy, stop to search the skeletons for anything of value. The undead leader, Milady La Vampyra tries her bolt of dark fear and one retainer simply runs away instead of dropping dead with fright. Huberic is reluctant to get closer, she's running out of skeletons. Both decide to claim victory and retreat...... 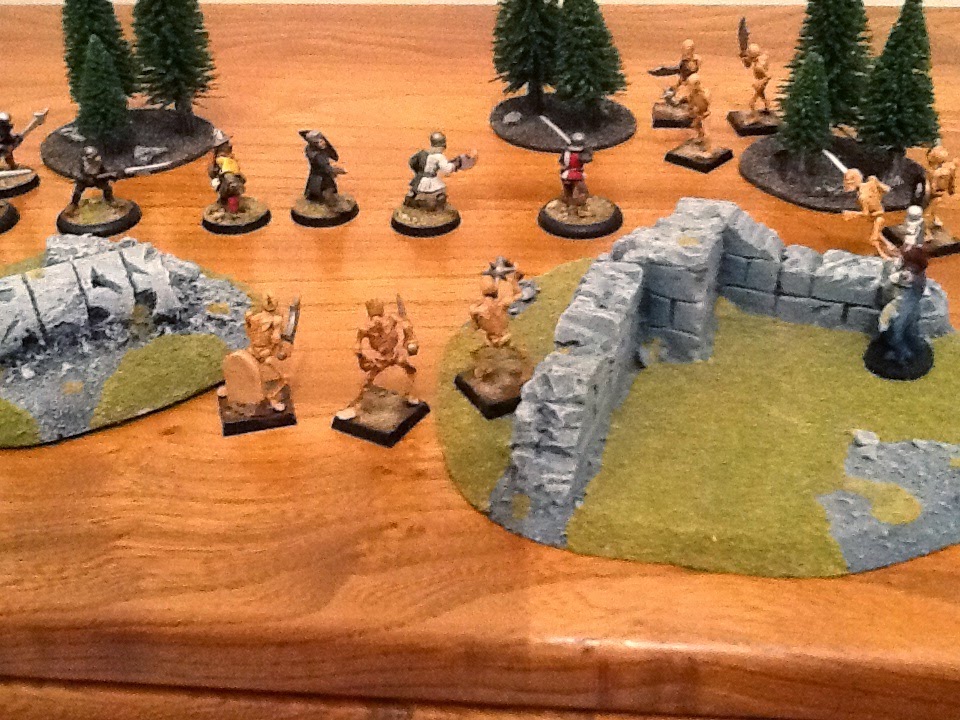 Huberics lads stroll up the road..... 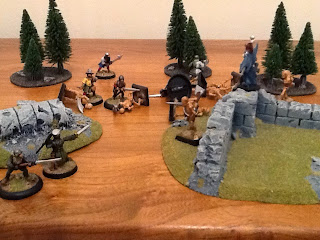 It's all going wrong for everyone...... This was a fun game just made up on the spot and it probably shows. I'd thought up stats for Huberic in the week,in all honesty the crossbow of speed - which allowed him to shoot more than once per turn was a bit excessive. Then again that's a magic item for you. I may change it to a one or two use item. This has given me a taste for fantasy skirmish again though and I'll probably think up more games in the Wilderlands. I've found Searchers of the Unknown - a very basic stripped down set of D and D rules which may be useful too.... Cheers Maff
Posted by Master Chef at 14:20 No comments: