Taking the battle door to door

Here are the best pics from our latest Lock Stock & Two Smokin' Sterlings encounter over the weekend. Rosamund Terrace. A street of attractive three storey Edwardian terraces in better times. It could be the street you grew up in or where your dad played footie in the road after school. In the Winter of '79 the battle takes place in any street, in any town.... 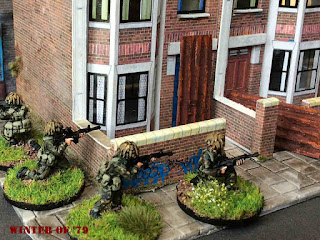 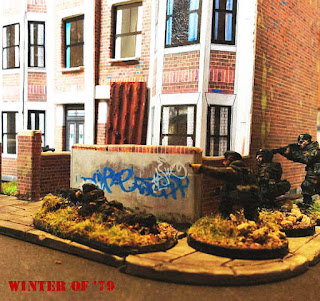 Eager to defend the Chippie, anti-government forces
spill out from Pike Lane to take up fire positions
(ex-Hotspur: Command and M&AWC) 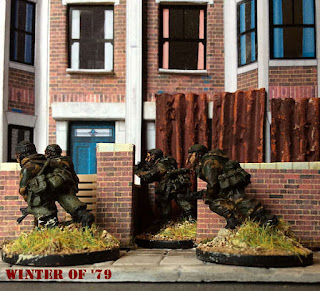 Gaz: "Let's finish this lads! Then a nice cuppa and
slice of cake at me mums!"
(ex-Hotspur: SAS/SBS & M&AWC) 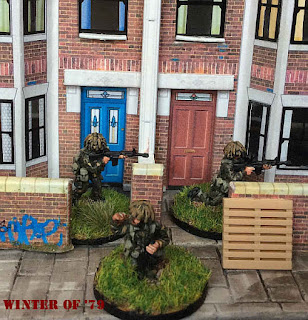 More troops are drawn in to the escalating gun battle.
Corporal Reg takes orders: "Two cod and chips, one plaice and chips.
How many pickled onions was that?"
(Elhiem Figures: BAOR)

Acting on a sound intelligence that a fledgling Anarchist gang is preparing a 'Spectacular' in East Whittington High Street Parade with arms received from a dissident Irish Nationalist group, the job once again falls to Gaz and the lads to terminate the threat...... 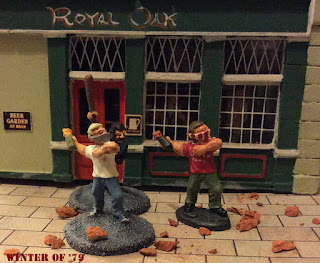 "Teenage guerillas on the tarmac"

Saturday 2.35pm...... Anarchist supporters outside the Royal Oak begin a distraction hoping create a 'come on' for the police and security forces.

Baz in an OP on Woolworths roof gets on the Larkspur, "Guv, I see longs'".  The order is given immediately. One word... "Execute." Gaz leads Blue Team across the roof from the adjoining C&A department store. 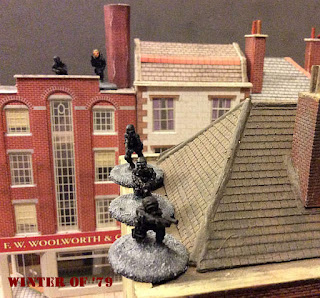 On the ground, Daz and Red Team burst from a GPO van and pound across the pavement to effect entry on the main door. 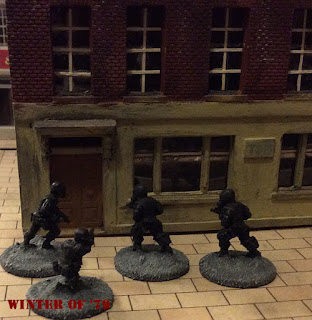 Meanwhile Daz and the boys put the boot in

BANG! Door blown in. Flashbang! Result: Player on watch stunned and now reduced to 'Milling'. Daz slots him. "Clear!". Up the stairs two at a time.

CRASH! Gaz and Goucho Johnny come through the skylight. The players on the top floor hear the noise. One dashes towards the sound the other cowers behind some cover. A brief exchange of gun fire but Gaz and Goucho Johnny have the upper hand. Skills and training overcome middle class political dogma.

Daz reaches the first floor. Another Flashbang. This one is over powered. It's all over for the would-be players.It looks like the one in custody might rat on the weapon suppliers... and with plenty of time to catch the score draw results on Grandstand!

Rolf has created a great series of figures which can easily be used to populate your Lock Stock n' Two Smokin' Sterlings guerrilla or urban rebel forces. The majority of the figures on this page come from the RH Models ever expanding Urban Meltdown range.

First up.... Let's look at UrbUKsquB: 12 figs with SLR in beret, £5.80. Rolf produces three near identical packs, providing the core of your urban anti-establishment forces. UrbUKsqu: 11 bareheaded figs (10 SLR, 1 Bren); UrbsquT: 11 bareheaded figs (10 SLR, 1 Bren) in 44 pattern helmet, both £5.35; and the pack illustrated below, UrbUKsquB: 12 figs with SLR in beret, £5.80. I have to add that Rolf captures the characteristic shape of the 44 pattern helmet very well.

UrbUKsquB: 12 figs with SLR in beret

I have to say of the three UrbUKsqu... packs, I really like these guys. Wearing a variety of civilian clothing they are really useful as pro-government para-militaries, fledgling private armies or organised resistance movements all depending upon the colour of their berets. The brighter the better!

Additional firepower for the UrbUKsqu packs comes in the shape of three near identical packs, UrbUKsup: 3 SMG, 2 GPMG (bareheaded); UrbUKsupT: in '44 helmet and UrbUKsupB: (pictured above) in beret at £2.50 each. Again, some nice figures. If you want to keep your costs down yet still achieve a good mix of figures, then you can use two or three different UrbUKSup packs to add additional variety to your chosen pack of UrbUKsqu riflemen.

Further support plus more mix and match opportunities can be found within the next two pictures. UrbUKbren: 1 NCO with FN (bald headed but ripe for conversio to a Punk with a Mohican by using Green Stuff), 2 figures with Bren (one in an open face balaclava) and 1 sniper £2.00; UrbUKsni: 2 figures with L42 (MK5) sniper rifle bareheaded £1.00; UrbUKCG: 2 figures with Carl Gustav MAW £1.00.

Now the L42, is a sniper version of the WW2 Enfield Rifle rechambered to 7.62mm. I think it doubles for a private hunting weapon or .22 target rifle, making it a nice alternative to mix into an a unit of irregular troops, especially a more rural guerrilla or local defence force.

UrbUKsni (left) & UrbUKCG (right)
Does the Sniper on the left look like Doyle or is it me?

More Twilight 2000 but still well within our Winter of '79 horizon, is this pack of 9 civilians with G3 rifles and 1 firing MG3. Sorry, simply can't find their product code!

Civilians with 9 armed with G3 and 1 with MG3

Wot! Figures with no SLR? Am I going soft? No! Some of my favourite figures are included in this pack. Now, the G3 in 20mm does have a passing resemblance to the FN/SLR, but don't sweat it.  European weapons are very likely to have been provided by sympathisers or purchased on the open arms market then smuggled in from the continent. The SAS purchased the G3 for operations in Northern Ireland and they were also used by other shadowy covert forces such as the MRF/SRU/14 Intelligence Company.

As the description suggests SASFalkFN are armed with FNs instead of M16A1 and CAR15's and have bare heads, woolly hats and a balaclava. This makes them useful as hardened and trained revolutionary/Independence groups or for mixing with 'green army' figures to instill a rebel feel to regular formations which have sided against the Emergency Government.

SASFalksni: 3 figs with L42 rifle mix of headgear £1.50 are just rebel forces through and through! Mixed with other armed civilians especially those with L42s you can create a nicely irregular rural force.

So, let's grab some figures at random from the packs showcased above to create a revolutionary force for Lock Stock n' Two Smokin' Sterlings....

Not bad as a first attempt, though I really would have liked to have picked out a couple of guys with Sterlings to include!  Well what have we got from our lucky dip? The 'Bloke' on the left looks like he could be 'Hard' but may just have a line of credit at Silvermans. Perhaps the 'Lads' in berets signify ex 'green machine' - could be deserters or ex-army. They could equally denote a local paramilitary or politically motivated group depending their beret colour. Then there's Ray, 2nd from right, the 'Sprog' of the group with his dad's hunting rifle.

Hope you found this 'showcase' useful. The figures presented are only a selection of those available from Rolf at RH Models. But even those I've illustrated will allow you to build interesting irregular, covert and para-military forces for Winter of '79.

Winter of '79 is staying where it is, instead I have 'crashed' to an alternative locale and dug in. It wasn't expected or planned for, but sometimes you have to mix life up a little. See different horizons. Breathe different air. And I have plenty of air! One of the many pluses is that my daily train commute has been replaced by this scenic walk to and from the office. Given the beach is literally minutes away from my front door, I'm making the most of the opportunity given to me to keep fit. 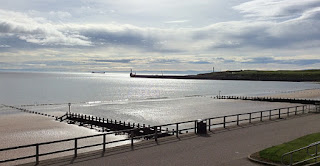 I'm just about settled in now and finding my stride. Winter of '79 will resume shortly, benefiting from fresh perspectives gained from these wider horizons. Naturally Lock Stock n' Two Smokin' Sterlings has been delayed, but not for long , and sometimes things happen for a good reason. Keep an eye out for some great news I have to to share with you very soon about Winter of '79 going mainstream.