First off, apologies for the lack of pictures. The light is spectacularly poor tonight and my carefully taken photos look too horrible for words. Anyway, I'm not traditionally a fan of martial arts films - or martial arts in general. Concerned to head off any bullying in school my Dad did take me to scope out the local judo classes as a kid but it just looked to much like a PE lesson and I think he suspected that if I did use that kind of skill in school I'd be painted as the bad guy who couldn't control himself.

As it was he passed on a few nuggets of wisdom he'd picked up in the RAF.......My favourite, was always get your head through a pullover as quick as you can so you're not blind, closely followed by the good old knee to the groin. His other advice - basic boxing tips - meant that when an older kid did once approach me aggressively, I went into a crouch, put my guard up and he looked at me as if I was a maniac and hoofed it. That's a long winded way of saying that I never really expected to play a game based on Kung Fu.......but there you go. 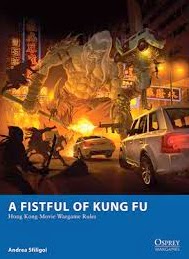 Last month I bought "A Fistful of Kung Fu" by Ganesha Games and two boxes of Northstar figures (Cops and Yakuza), followed by some Foundry Street Violence SWAT. The figures are easy to paint so had their first outing tonight in two games - Cops vs Yakuza and then SWAT vs Yakuza.

My tendency is to be shooty and so there was a lot of running about and "hails of fire" and not much "crouching tiger, hidden wombat". The great fun is the reaction roll....stuff up your activation and the enemy protagonist can try for a free move for each of your missed activation rolls. That's how in game one, Det Sgt Chang leapt through a window and shot gunned a Yakuza to win the game. The second game ended even more Hollywood. The SWAT team had failed to make any real impact but had managed to wound the Yakuza boss as his bodyguard fluffed three activations. Sgt Kylie (a Foundry Street Violence pack contains at least one female. It's the law you know) rolled three successes to react. One hail of fire took out a bodyguard, a flying kick took out the second, leaving a clear LOS for the sniper onto the Yakuza boss.....and he botched it too. The Yakuza boss reacted, stood up and promptly botched an activation giving Kylie a chance to empty her compact H&K in his direction, down he went and the cuffs went on.

The fisticuffs are more decisive than the "gun fu" but the grunts in your gangs won't last long, your protagonist can usually take about 4 wounds - so they are tough but not invulnerable as a hail of bullets at close range is good for one wound as long as you roll high.....and the SWAT were all in body armour which helped a lot. Actually most of the Yakuza were as well - that does explain the hint of a standoff that developed. I'm not sure if I'll go the whole Bruce Lee and buy martial artists in 28mm. I'm more inclined to a cyber-street-samurai kind of thing a la "Neuromancer". Still it is a fun set of rules and I'd say that if you are a fan of the genre then you really do need to get the rules, it's as simple as that. And a final bit of advice from Dad, once you've kneed them and they are gasping for breath, run like hell.