Thursday evening, 5th June, Maff and I replayed the taking of Pegasus Bridge in 15mm. The game took place only a few hours short of when it had actually happened 70 years before. In truth, the game owed more to the classic scene in the film The Longest Day with Richard Todd playing Major John Howard, than to the history books but it was a great wargaming experience for all that!

The Pegasus mission was about 'dash' so I wanted to keep the game moving and decided that SWATTERS would fit the bill, especially as we have built up experience playing them.

The Ox&Bucks consisted of the compliment of Glider No.1 and Major Howard to make 20 figures in total:

Operation Deadstick as the mission was called, began with Maff texting me with the message "Casting Off". Onto Skype, I use my iPad to give Maff a pilots eye view of the glider coming into the objective. Crash.......... 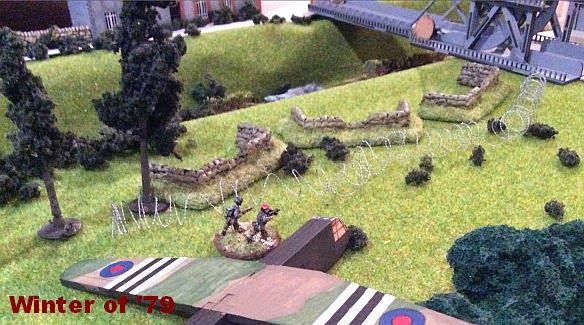 First blood to the Oxs & Bucks! The very first men out of Glider No.1 shoot the unsuspecting German sentry with the luckiest of long shots. Even luckier, the German garrison fail their activation rolls....obviously having trouble getting their jackboots on! 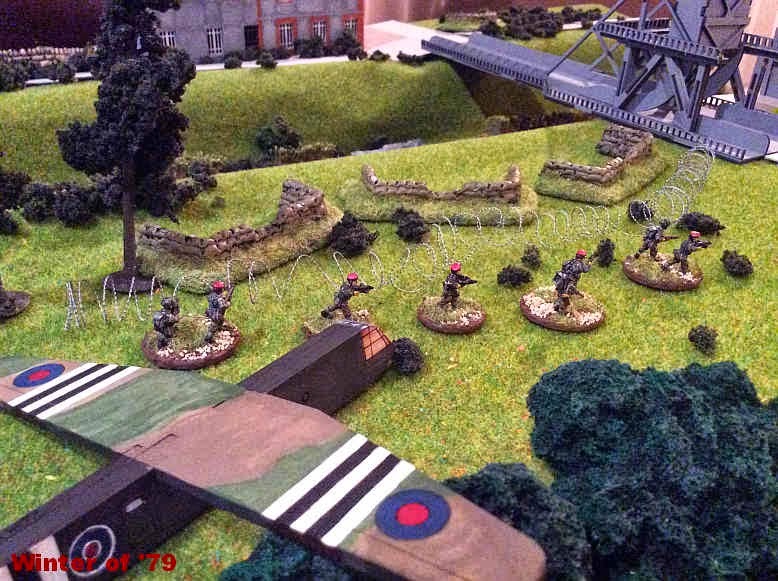 The red berets begin pouring out of the glider 'Denny' Brotheridge in the lead group. His blood well and truly up Maff decides to take the bunker and bridge control building (doubling as main German bunker/HQ).

The lead Close Assault group manage to grenade and Sten the Germans manning the MG pit, but themselves including Denny Brotheridge are cut down as they make for the control building. 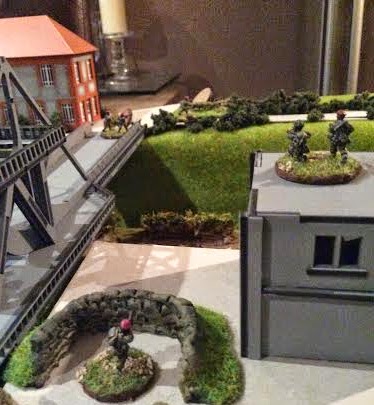 The following Ox & Bucks rifle group make short work of the Germans with some well placed grenades but this diversion has bought time for the defenders on the west bank to man their MG42s. One in an emplacment in front of Cafe Gondree, the other in the rear garden which could and did bring devastating enfildaing fire on the bridge. 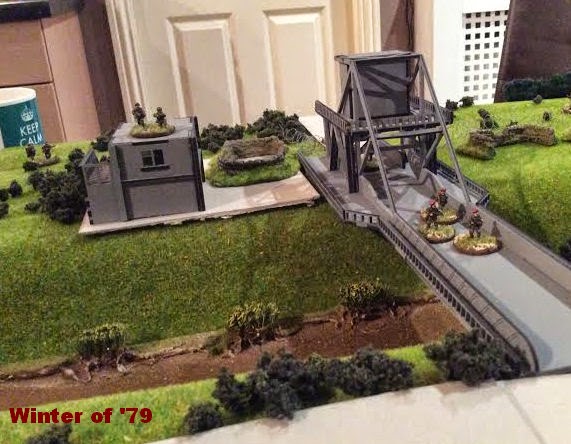 The second rifle group rushes the bridge but have two pinned and lose two men to withering MG42 fire from both German guns. Then the defenders dice run out of luck and with that run out of activations! Gott in Himmel! 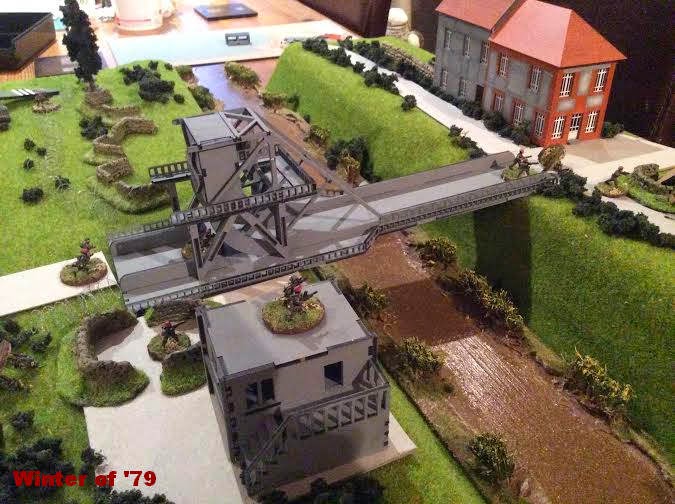 Major John Howard (Richard Todd) is now on the scene. A quick order, a shed load of activations and the Ox & Bucks race across the bridge under covering fire from the Bren (Support) group who are nicely ensconced in the control bunker/tower! 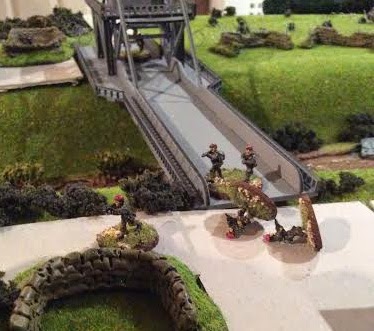 Two more men fall to point blank German fire before Howard leads the final charge on the jerry MG42, grenading it into oblivion. Maff sends the code word "Ham and Jam", Benouville bridge is secure and goes into the history books as a cracking game!

Ox & Bucks are Peter Pig, Jerries are pre Flames of War, Battlefront panzergrenadiers. Pegasus Bridge is an MDF kit from Ed at Wargamestournaments (eBay seller), the Glider and Cafe Gondree are MDF kits from Warbases (the cafe has moulded plastic tiling added), barbed wire from GF9, and entrenchments SB_Minis (eBay seller). To add that retro 'authenticity' the terrain was very old school. A grass mat laid over books.

Note that I removed casulaties for the sake of clarity during the game. Had it been a face to face game, I would have left them in place for colour.

Loved it!  Two nights of painting and constructing terrain culminated in an exciting game that was touch and go. By delaying in getting boots across the bridge in the first rush, only poor activation dice rolls on behalf of the Germans saved Maff from failing to get take the west bank of the Caen Canal. Of the 20 Oxs & Bucks who started the game, just 12 remained when the "Ham and Jam" signal was given. Despite the fact I never finished the detailing on Cafe Gondree or managed to weather the bridge, it was all forgotten and never mattered an ounce during the game.

I'm sure Maff will appreciate a re-run sometime and it's a perfect scenario for solo play or the opening game of a mini campaign.

We rebooted our weekly gaming in style tonight with a fitting tribute to D-Day. Pegasus Bridge in 15mm using the core mechanisms from Swatters for a fast, furious and above all, fun game! 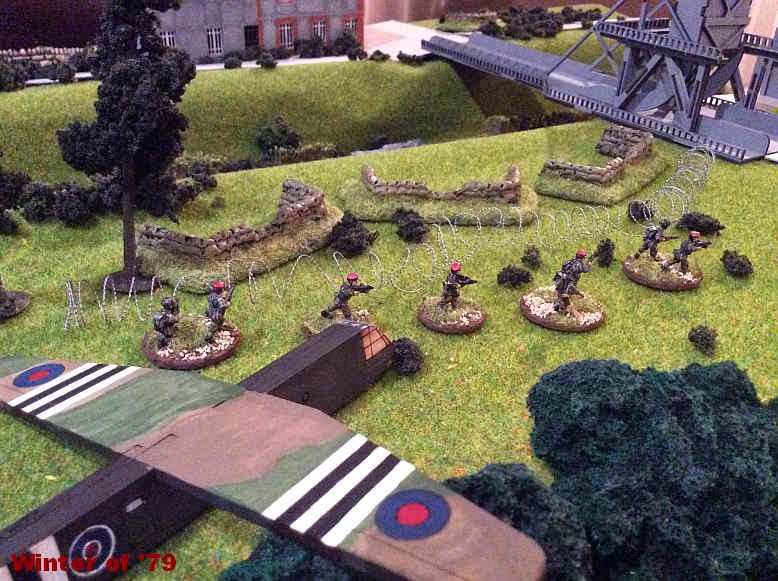 Peter Pig airborne make a rush for the Duty Free

More abut the game later when I have some time off over the weekend, together with my thoughts on how choosing a pragmatic approach over 'realistic' allowed me to complete this project in just two nights with no  reduction in game quality.

At this point, let me say a big thank you to Bill at SB-Minis on eBay for helping me out at short notice with those defences. A great guy and recommended eBay shop!