Sunday, Coffee and The Archers

It's Sunday morning, the sun has emerged after 6 months of winter darkness. Time to revel with a cup of coffee, the Archers Omnibus and a quick fight in the Winter of  '79 for a hamlet in Borcestershire. 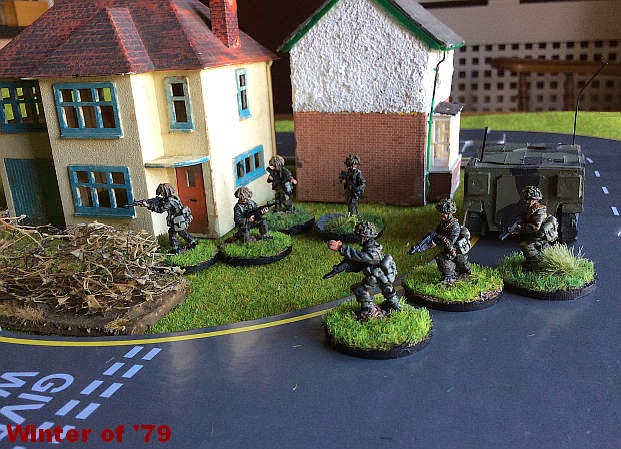 Somehwere near Ambridge. A Government section
debussing from a Saxon APC (FV432 standing in).

The road is the 'ready to drive roadway' from the Early Learning Centre - picked it up on sale for under a tenner in September. You get forty-six 2mm thick laminated jigsaw carboard roadway pieces which include a roundabout, crossings, junctions, long and short straights and bends. Enough to full my kitchen table and more. 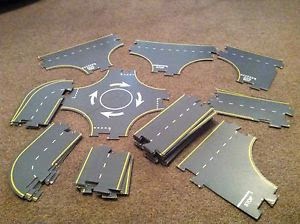 Each straight piece is around 8 inches long and 4 inches wide. It also works for 28mm as a smaller B road. Cheap and effective. Worth looking out for on eBay, where you might even find it cheaper.

6th of June, the Shore of Western Europe 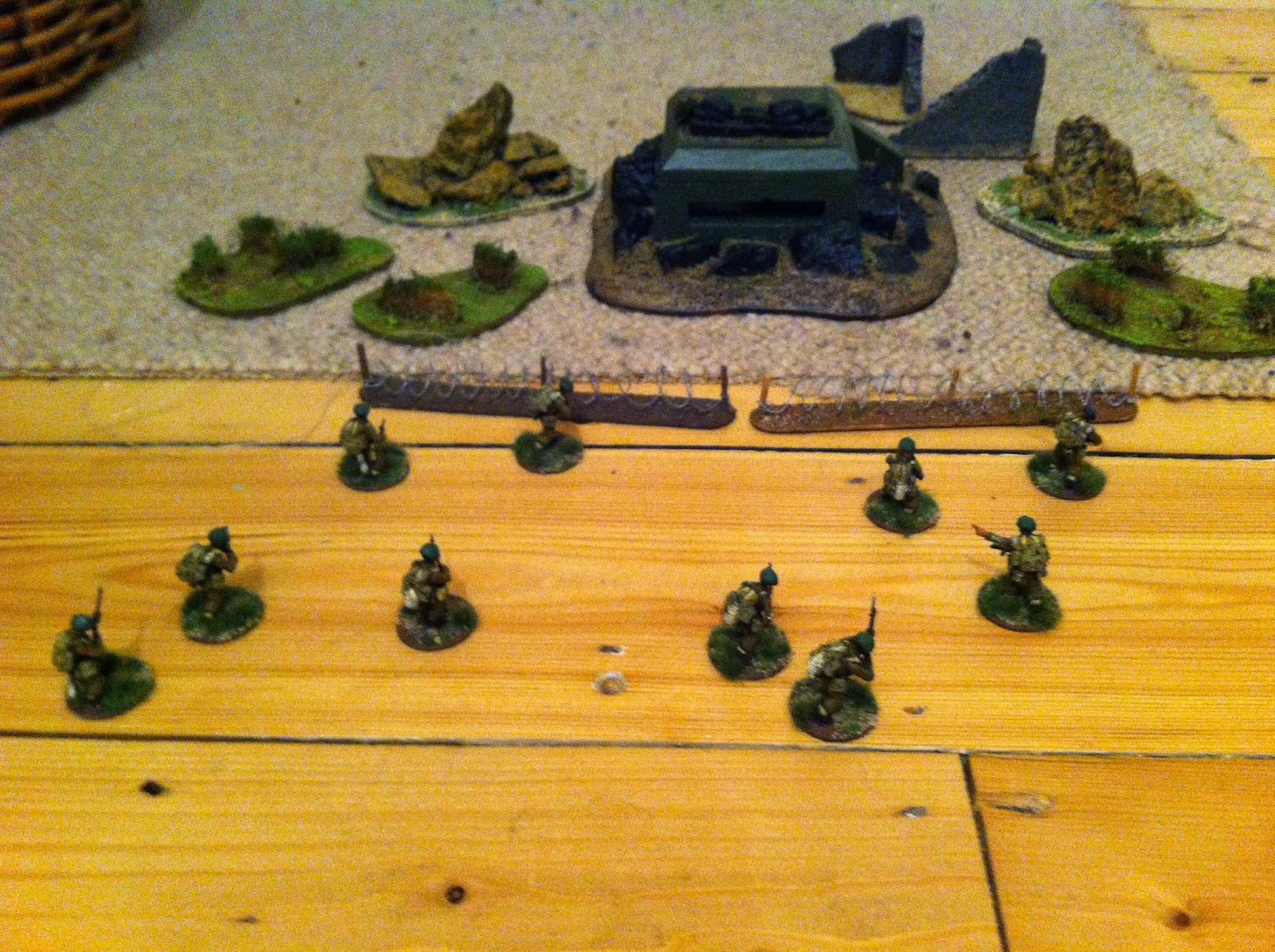 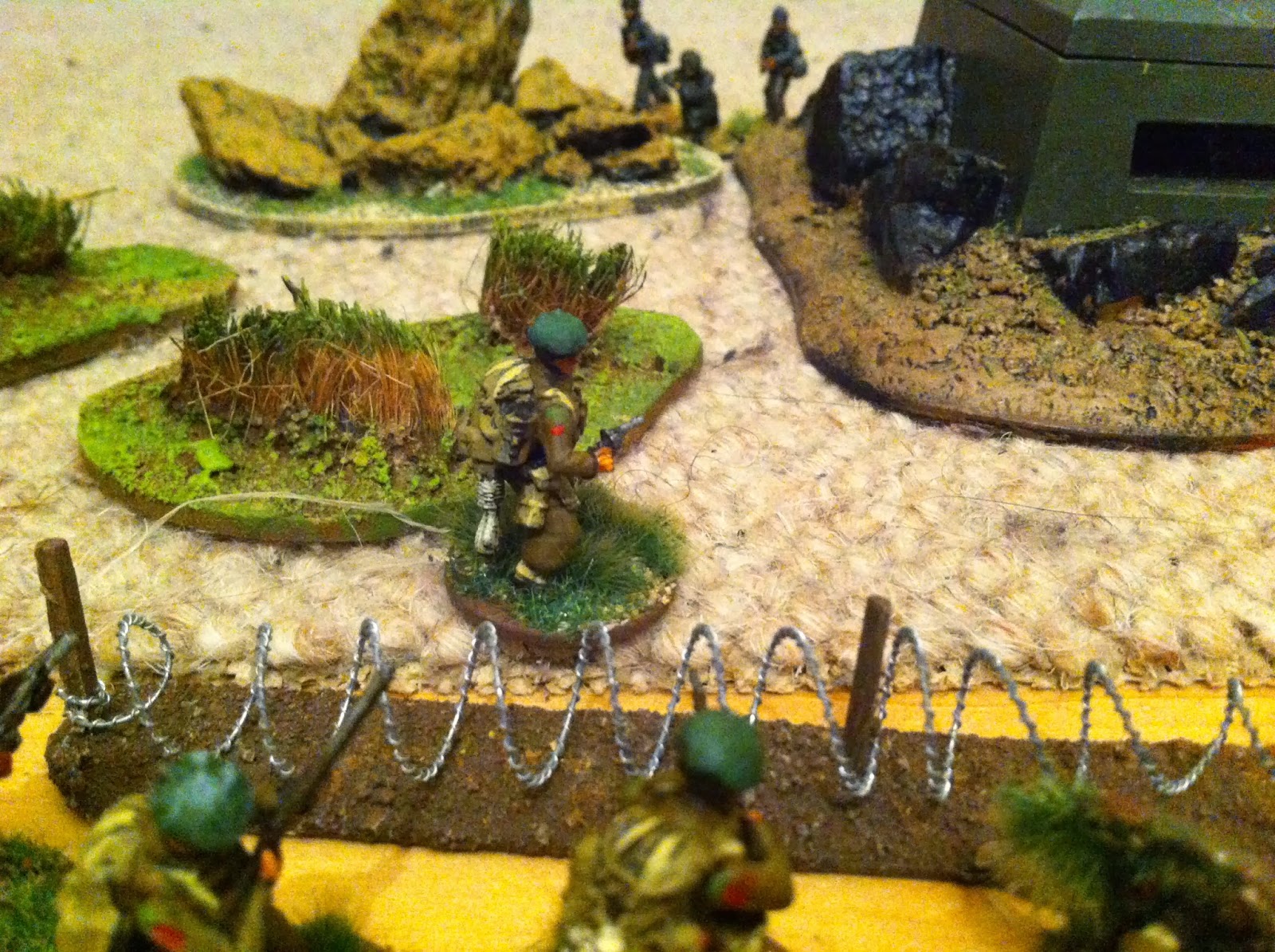 Across the wire, in the distance the bunker cover party appear and open fire 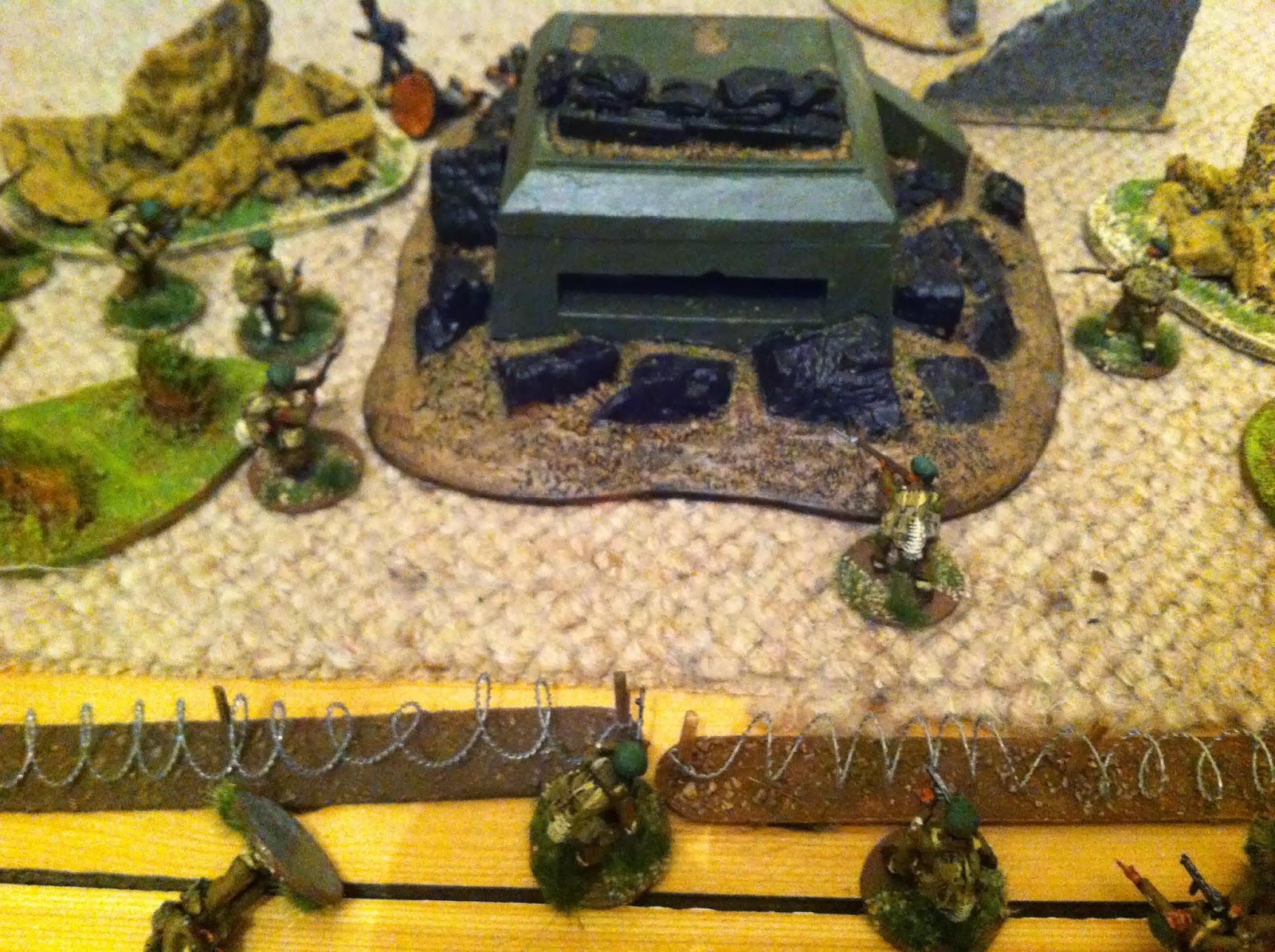 The Commandos are held up by the wire, bren fire, grenades, sten guns all have no effect on the machine gun team in the bunker - but one burst of fire does injure the loader and the rate of fire slackens. To the right a lone rifle armed commando takes on three schutzen until his mates clear the wire 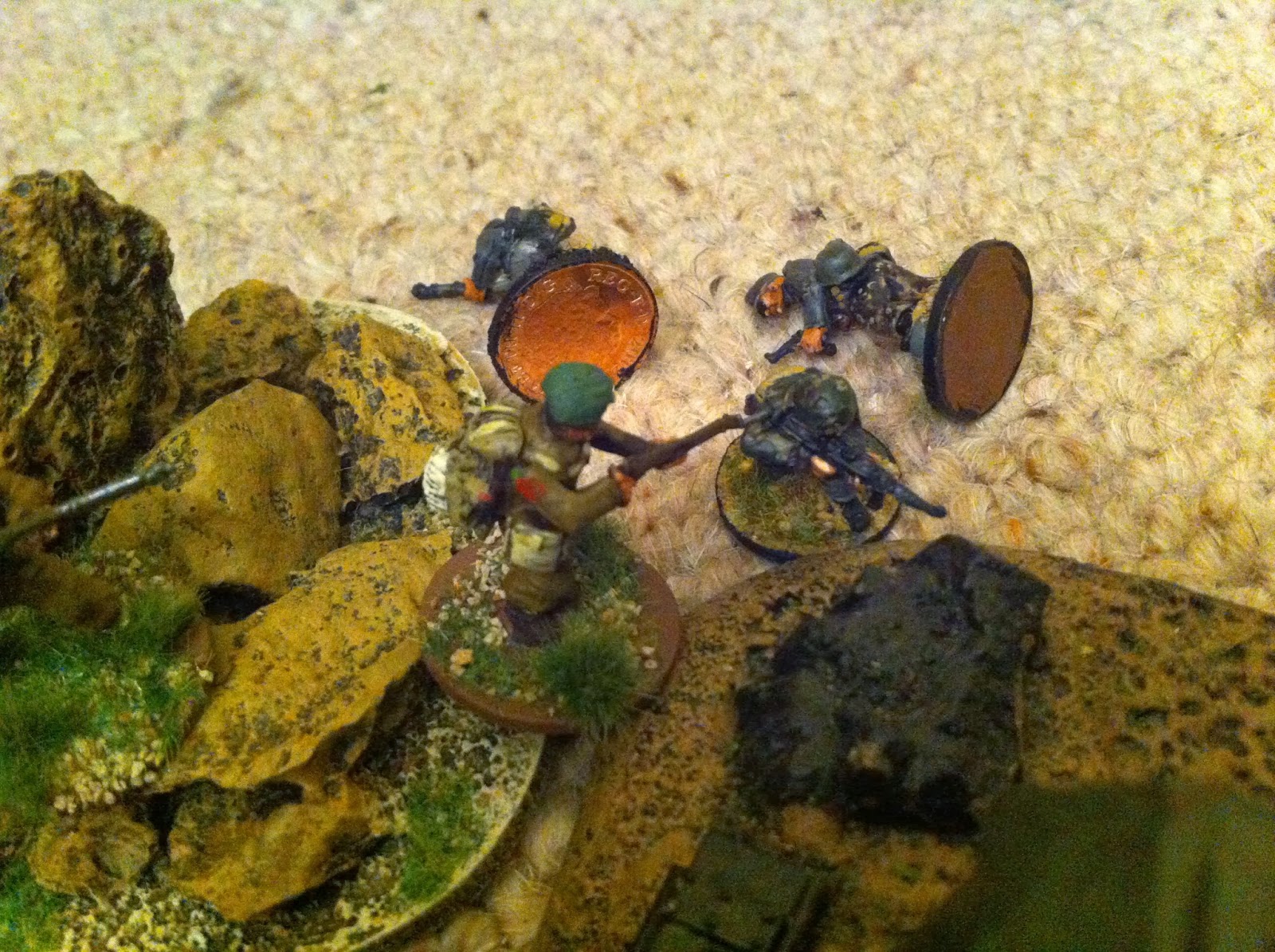 At them with the bayonet! A volley of shots and X Commando go in to clear the cover party. 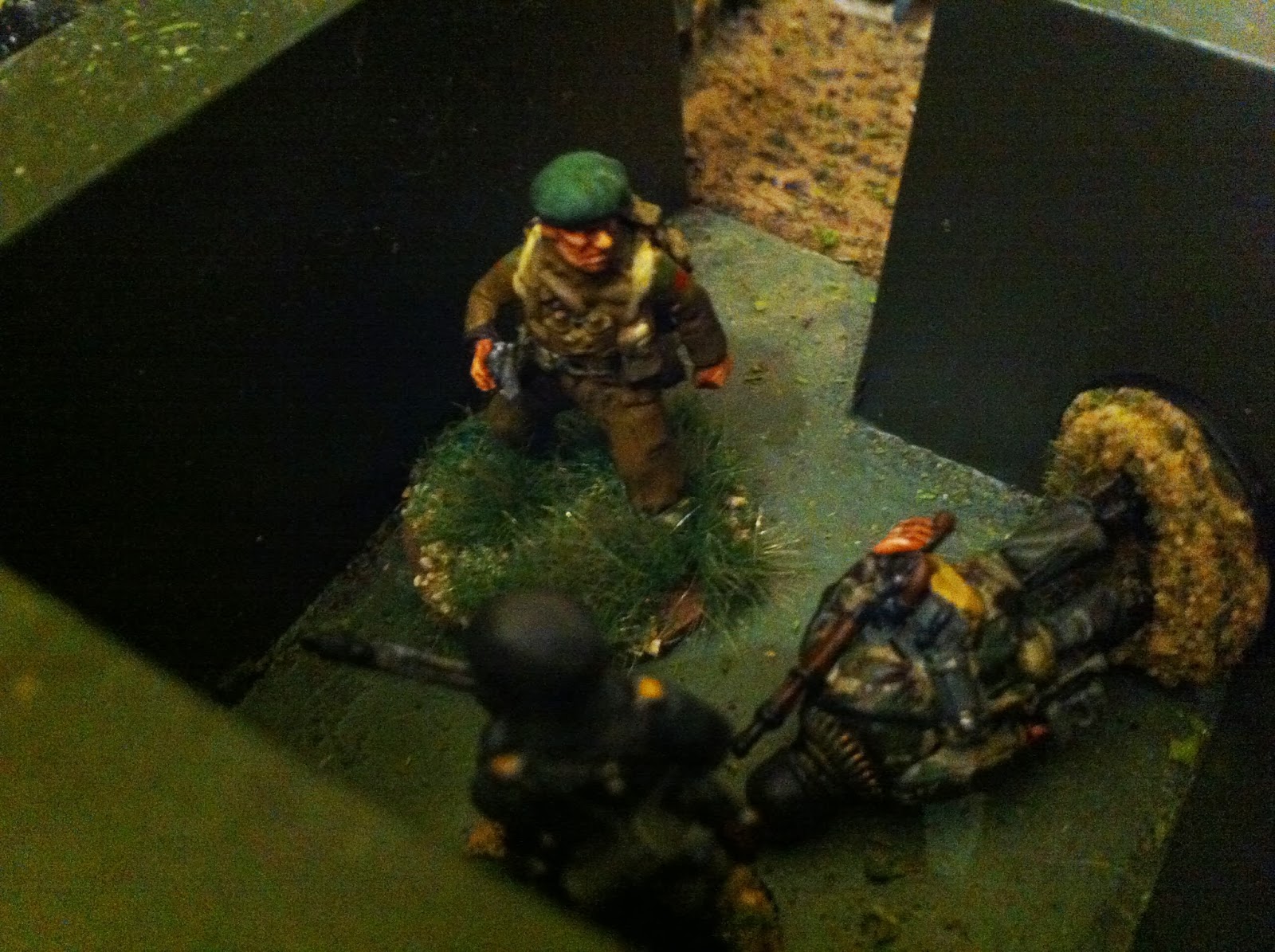 This was an impromptu game with pretty - ok, very, basic terrain. The figures are Warlord Commandos painted by myself while the Germans are warlord FJ painted up in "full on late war camo madness" by Jim Brent. Mark and I have speculated over using IHMN for WW2 and this is the result. I gave de Winter marksman with pistol, inspirational and leader with the stat line of a Captain from IHMN, the lads were rated as Guards/Royal Marines with a couple of NCOs. The Germans were jager from the book; the MG42 was presumed to be brassing the beach up in general with one unlucky commando getting its attention each turn. This really meant that until they cleared the wire, one trooper was being lost most turns. That was until the turn the bren gunner was hit; then a sten gunner was fired at and survived, he managed to clip the MG42 No2 after which it didnt hit anything.

Due to internet wobbles this took longer to blog than play and does raise a question in my mind - just what did X troop get up to before D-Day?

Apparently I've been running around with two cracked and a dislocated rib! How? I had a minor accident in January, still sore now in March, so went to see doctor. When I had the accident the Doctor was concerned quite rightly about concussion and we put the rest down to general bruising. Being a bloke I ignored the pain which after the first week was more of an inconvenience and on-off distraction rather than anything serious. 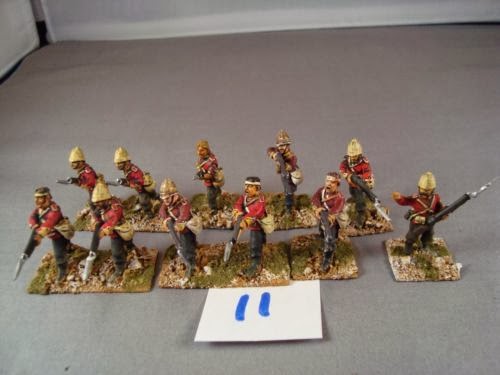 Anyway, picked up these 'pre-loved' painted Zulu War Brits on eBay. Heather liked the look of them and she thought they'd be good for our non-wargamer multi-player Rorkes Drift game. Done.

Update: Pain finally went away over the Easter Break.
Posted by Mark at 11:38 2 comments:

Thanks to encouragement from Jim Brent, I've started to get my painting mojo back! Still early days but I'm steadily working through Ultra-Modern Russians. Thought I'd finish these before turning my hand to 1979 Brits. Unfolding events in the Ukraine are a complete co-incidence. I simply wanted to get my hand in painting camo before taking on British DPM again. 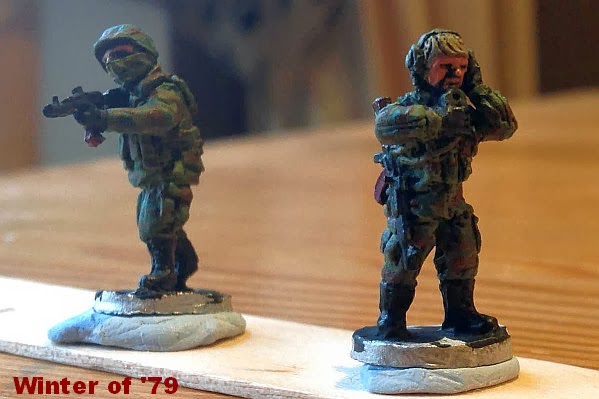 I've chosen to represent the slightly older Flora pattern camouflage. After a couple of tests, I deliberately decided to paint the pattern larger than scale and it works really well. A nice contrast can be gained by painting their kit green, and they have a lot of kit. But instead I've taken the slightly harder route and painted it in Flora too (for the most part).

The Flora pattern comes in different shades and so with the first couple of minis I alternated the colour shades between the fatigues and the kit. And you know what? Couldn't tell more than six inches from my eyeball without painting the lighter shade almost khaki drill. Saving myself the extra effort I just used the same 'avocado' base colour for both the fatigues and kit throughout all 20 plus minis.

Glad the figures worked out to my liking as it has boosted my confidence no end. OK, I'm a bit slow and hesitant just now, plus have a lot to relearn but I'm painting and enjoying it.

Cheers
Mark
Posted by Mark at 00:29 No comments: