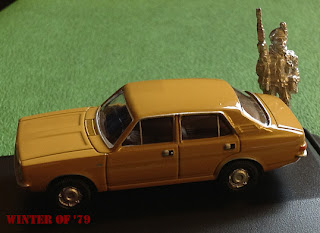 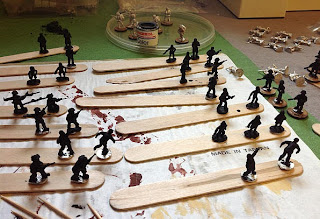 It's not often these days that I get home to find a new set of miniatures on the mat that make me want to place a second order straight away. But Elhiem's new BAOR figures have done just that.

Principally because they have bags of 1970's and early 1980's character and very few duffers in the packs. As you can see, I couldn't wait to empty all the packs out onto the table to mix and match the Toms into various combinations of bricks and command elements.

The strongest figures? Definitely BAOR08 SLR Skirmishing. All good solid poses, in fighting order. That kneeling NCO is going to get a bit hackneyed in a platoon unless you swop one for an NCO from BAOR01 Brit Army Section on patrol. Be nice to have an extra command pack with an alternative platoon leader and two extra corporals. This would help change the character of each section. The tin Elniem use is a bit tough, but I'll try to convert one of the NCOs into a classic 'rally on me' pose.

BAOR05, GPMG team firing using wall as cover is very nice. Though I'm less enthusiastic that you pay the same as a four figure pack for three figs and a sliver of wall. Especially as the third figure is kneeling quite passively, thinking about his insides after that last tin of Chicken Supreme. Shame, as he let's down an otherwise good set. He's better removed and placed in an O Group with the platoon commander or alternatively utilised as a No. 2 for the Charlie G or 51mm mortar from BAOR6.  One small feature I do like about BAOR5 is that the GPMG bipod is cast directly onto the wall section. You just line up the GPMG and drop it in place. 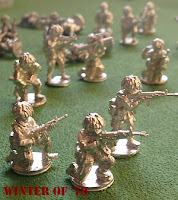 BAOR06, the launchers pack offers a 51mm mortar No.1, a kneeling Blowpipe No.1, standing rifleman firing LAW (brave man) and a terrific Charlie G No.1. All very nice figures.

The platoon command pack BAOR10 is the weakest of the bunch in my opinion. The kneeling Rupert and Sparks are OK, Great for O Groups. Put Sparks with the kneeling NCO from BAOR08 and you have a nice little "Contact.. Wait Out!" set. The medic with Sterling is so so, as is the kneeling rifleman with IWS sight. I'll give him a Glengarry head and move him to bolster my small Internal Security collection.

OK, after getting them in my hands and playing around with them, what's my verdict? Sorry, no Emperors New Clothes here. Overall I'm favourably impressed but it's tempered with some reservations. Positives are..... bags of character and mix well with Britannia BAOR and others, so if you have an unfinished platoon or need additional support weapons, here's your chance. The support weapons are a big positive and that Sustained Fire GPMG is the best on the market. Downsides? Well, I won't be buying more Elhiem GPMG teams, three figs for same price as four is having a laugh, especially as the third figure is just a filler. The platoon command doesn't inspire me either as is. Though it does make a nice diorama if you add other kneeling riflemen and NCO figures to create an O Group, as stated above. Instead I'll buy an additional Patrolling pack, utilisng the NCO pointing as platoon leader and converting the Charlie G No.1 toting a Sterling into his signaller.

A further possible downside is that if you are collecting BAOR Mech Inf to the full TOE given in most rules it's going to cost you, as the section's Charlie G is in the 'Launcher' pack. You'll need three of those! Luckily for you Winter of '79 bods, UK establishment and light role battalions only require one Charlie G per platoon! I recommend getting Platoon 20's infantry heavy weapons pack instead if you are playing BAOR orientated games. The figs are slightly smaller, doubt it will be noticable when painted, but for £2.50 you get a lying GPMG team, a nice Charlie G and a spare standing GPMG No.1. Save over £4.00 per Mechanised Infantry section!

So there we have it. A great addition for Winter of '79 gamers. Everything you need for regular or TA formations and easy enough to buy when you have cash to spare and just want to order a couple of packs to have something to look forward to when you get in from work.

On the back of the Elhiem BAOR releases, Maff and I held our own O Group and decided that it was time to bring order to the chaos of our collection which has grown organically over the past couple of years. We are confident that these new figures will provide the basis on which to achieve that. 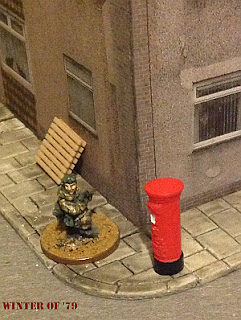 One of the most important if understated visual elements in any urban game set in western Europe are pavements. Sure you can plonk your buildings down on a grey surface and be done but it lacks something.

Pavements provide definition in the urban scape. They give a clear distinction between highway and pedestrian  - road and built up. Expanding the footprint of  those terraced rows or high street shops, turning them into built up islands, they offer a psychological barrier, a movement channel, a mini objective.

They also host their own iconic urban gloss in the form of  lamp-posts, telephone boxes, rubbish bins and more.

I've been wrestling with getting the right pavements for Winter of '79. Card and paper just didn't seem to cut it. Finally I managed to hit on a solution thanks to an enterprising eBayer selling OO scale scenic moulds for £6.50 plus postage. And you can see the results for yourself when given the quickest of washes with GW's Nuln Oil.

I already had a carton of Woodlands Scenics Lightweight Hydrocal casting plaster, so thought 'I'll give it a punt for a few quid'. The mould arrived before the weekend allowing me to start a cottage industry churning out 80mm x25mm x2mm pavement section after section.

I have to admit that it was fun of sorts, but I had a day to spare so it was just a matter of being disciplined as you obviously have to wait for each batch to set and harden before you can make the next pair of pavements.

Each set took 5 minutes to mix and pour the Hydrocal. I used one heaped and one level teaspoon of Hydrocal mixed with two teaspoons of water using a wooden coffee stirrer. Nothing onerous there. Then laid to one side for a minimum of 40 minutes to set. I basically looked at it as an hourly task - returning each hour on the hour to cast a new batch.

So, what about the results? Well not surprisingly they got better with each attempt. Even so, you can see in the 'before' photo below that the best of the cast pavement sections still had enough of a rough edge that they will need to be smoothed off with an emery board. But this takes only seconds.It's exactly the same batch in both photos

So here's what I learnt after a few breakages for those of you who may be tempted yourself.
The Hydrocal is a VERY lightweight material. I am only using it as it's to hand and will 'paint' the cast pavement sections with PVA to strengthen them. I may try some smooth Polyfilla next to see what the results are. The Five minute stuff would be ideal if it worked.....

Alright then, want to try this for yourself? Check out eBay seller 087_odea. 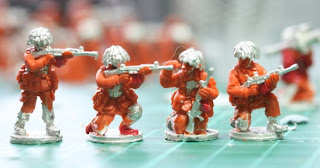 The Holy Grail of 79 Gaming.

Last week I was down in Aberdeen with the family and decided to pop into Hobbycraft while waiting on the ferry. I haven't bought much in here for a while as they don't seem to stock a lot of gaming stuff nowadays. I was really surprised to find that they had these two great Hornby pieces and at the Bargain price of £10 each. They are going to look amazing as the centrepiece for a game. 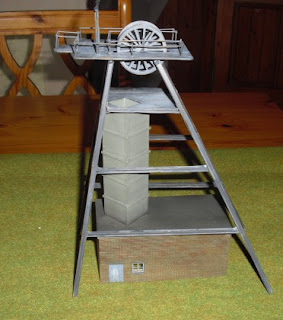 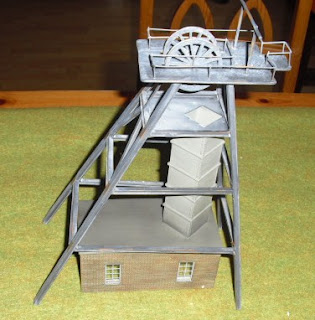 They are the Hornby mineshaft building and Headstock 2.