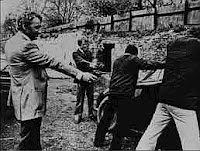 Terrified shoppers in East Whittington fled to safety as a gun battle erupted on a busy high street, leaving seven dead in it's wake. Laura Sangster (23), mum of two young children (5&3), was shopping at the time and said it was like "Hell had burst out of the ground."

The shootout happened when Special Branch detectives and specialist firearms units of the Metropolitan Police staged an operation to foil a raid by known criminals on a Post Office van carrying £10,000 worth of Postal Orders. Despite the increasing presence of troops on the streets, the hardened criminals planned to ram a brown 1967 Ford Anglia into the Post Office Van and brazenly make their escape in broad daylight.

Instead, the criminals found themselves caught in a deadly crossfire between armed police and Trotsky terrorists. Detective Inspector Ricky Stein told reporters, "This was a textbook operation between units of the Metropolitan Police. Resulting in a gang of known criminals has been brought to justice and several terrorists being taken off the street." Dave Povey (42) arrested for armed robbery said "I'm an honest hard working villain and these bloody commie Marxist hooligans deserve all they get. If the Sweeney hadn't put a bullet in my leg, I'd have joined in giving them a kicking."

Later in court, Dougie Dinsdale (34) convicted armed robber, pointed at Police witness Rodney Cumberbatch and screamed "you're dead, you !£&@king toerag grass! You're going to wake up in a !£&@king flyover!" 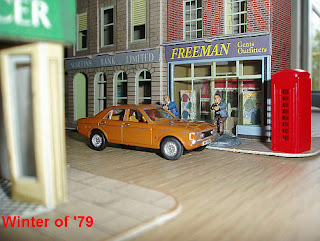 Not sure I can do justice to this game....  I was late in the door on Wednesday so set up directly on the kitchen table. Terrain was simple, a high street with two junctions. A dozen buildings, mostly Metcalfe, conveyed the right impression.

Maff hankered after taking on the role of DI Ricky Stein, and played the opening theme of The Sweeney from his iPhone to set the tone of the game. Then it was Crash! Bang! Wallop! The Povey gang, rammed the Post Office Van and leapt from their car to overpower the van's driver.

Observing the scene from a side road, Stein shouted "All stations, Go! Go! Go!". He and DC Malt leapt out of their R Reg Ford Cortina MkIII. Shots were fired. Shoppers and passersby screamed. A mobile unit and Ford Transit carrying D11 skidded to a halt to block the escape route of the criminals. There were warnings, shots, a criminal fell. Two more ran into Markies. Another grabbed a black market automatic weapon from the boot of the Anglia.

Unnoticed, a young long haired man in a green tracksuit was kneeling in the telephone box opposite the Crown public house, shouting down the phone.  Martin O'Keeley was a member of the IRA's West Belfast brigade. He had come to East Whittington 3 months ago and was living in a garret above his auntie's pub. The Crown. Here, aided by his girlfriend Bridgette, he built a cell from disaffected, anti-establishment   young men and women. His garret had become a small bomb factory and today, all six comrades were busy making the next batch of explosives.

He had been making a call to his handler when the police flooded the street. "It's on! They've come for us" he told Seamus, then rang the flat. 3 long, one short.....

A sash window opened and petrol bombs rained down into the street. One hitting the Post Office Van which erupted in a black plume of fire. Stien uttered "Wha' the !£&@king 'ell!". Then Bridgette appeared from the shut pub to shoot a surpised D11 officer. His mate felled Bridgette with a single burst and pulled his wounded colleague to safety. As he did so, O'Keeley stepped from the Telephone Box and shot him in the neck.

Two other D11 officers by the Transit managed to react in turn and simultaneously fired their weapons at the Irish terrorist. He collapsed like a broken doll.

The curtains above twitched. Inside someone shouted "B@st@rds!". A further petrol bomb fell in front of the pub, catching one officer who rolled on the ground to put out the flames.

The scene was chaos.Two D11 firearm officers and Stein were trading shots with Povey who was holed up in Markies doorway. Cumberbatch, the police informer had legged it through Markies aisles and out the fire exit. Malt and two further Special Branch officers were edging along the shop/pub fronts, beneath the windows from which the petrol bombs had rained.

Povey was hit and dropped his weapon. Stein closed in first and put his foot on Povey's wound.  "What's going on! How many more are there?"

"Ok sunshine, bleed to death then!"

The Crown now became the focus of the police's attention. Malt went through the door first along with a D11 officer. A wannabe terrorist fired a shotgun from behind the bar. It went high. Malt ducked and the MP5 of the D11 officer dropped the terrorist. A shadow could be seen disappear through the back. As the remaining officers flooded the pub, Sally Kiln, startled by the sounds downstairs knocked over the table....

An explosion shook the building. Glass cascaded into the streets below. "Out! Get out!" shouted Malt. Two Land Rovers arrived and soldiers piled out.... 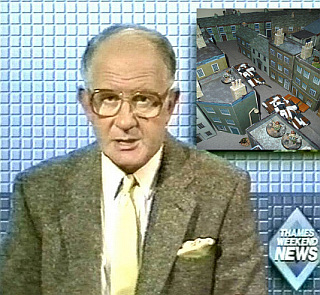