Let's see out 2013 with a quick but colourful Zulu War bash using In Her Majesty's Name. I hope everyone had a great Christmas and looking forward to 2014.

2013 has been a year of challenges. The last few months at work have been demanding and left me with little in the way of energy in the evenings. Whilst we've also dealt with the double change curve of Heather first being made redundant after 20+ years with the same company and then going off to university as a mature student to do an MBA. Glad to say that as a consequence of all these things happening I begin the new year in a great new job together with a new mindset.

My own wargaming orientated Christmas presents this year revolved around the Zulu War. These were Warlord's new Black Powder Zulu! colouring book which came with a nice Prince Imperial figure. Heather gave me Adrian Greaves' Forgotten Battles of the Zulu War.

To the game. Nothing complicated. A small column carrying medical supplies has to leave a wagon behind when it breaks an axle. Lt  Richard Vandyke and a small detachment of the 2nd Benson & Hedges has been detailed to remain with the valuable supplies whilst a replacement wagon is sent from Eshowe. On hearing of Zulus approaching Vandyke decides to build a small barricade with the supplies, behind which he will make his stand.

The one change I made to IHMN was to use a base of 4 Zulus to represent 1 Zulu warrior under the game rules, purely so I could use a mass of warriors on the table. This is Victorian pulp after all, the stuff that builds an Empire! 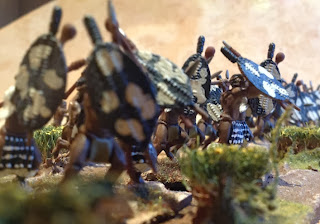 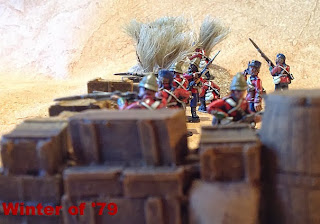 "Because we're here, lad. Nobody else. Just us." 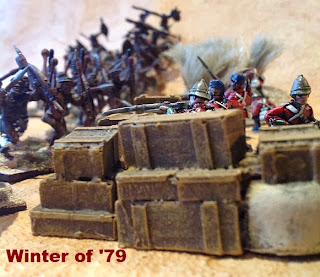 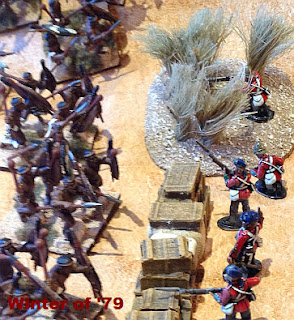 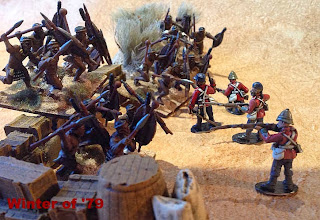 "But bullets run out... and those bloody spears don't." 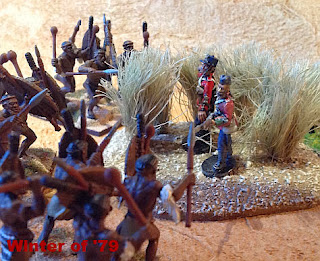 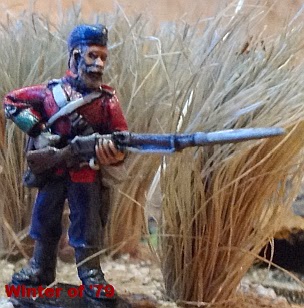 "a bayonet, with some guts behind it!"

Let's say up front, for a simple game, "That was fun!"  Sgt Doubletime went down straight away and the 'marksman' holding the bushes was overwhelmed by the Zulus who 'mobbed' him. Lt Vandyke proved his courage through his higher Pluck value which saw him and Private Henry Martins, pictured above, able to fight their way back to cover. Martins offered to 'hold them off' whilst Vandyke escaped into the rocks but Vandyke passed his pluck roll and opted to stand side by side with the valorous private.

It was a cider gulping finish. Three against two. Two bases of Zulus 'mobbed' Vandyke who shot one with his Beaumont-Adams revolver before being assegaied, whilst Martins dispatched the other base with his last cartridge (determined by a Pluck roll, just for the sake of it!). Martins now showed off his 'bayonet drill' skills and drove his Sheffield steel blade into the Zulus to remain last man standing on the field. "God Bless 'er Majesty!"

Using multiple bases to represent warriors such as the Zulus worked far better than expected. I kept forgetting that they represented only one man as far as the game was concerned and this both increased the in-game tension and overall enjoyment. The only thing that would have enhanced the game visually, apart from getting round to basing my redcoats, would have been some dead figures to replace those who became casualties. BTW, all the redcoats were painted by James Brewerton, a really good painter and a great bloke.