My most recent order from Liberation Miniatures' Urban Meltdown and Falkland era Brits 1970's/80's ranges has dropped through the letter box.

There are some cracking figures here. After a quick look see through the mountain of Ziploc bags, if I had to choose, my favourites are the various Scots in Tams and Glengarry caps. More about those in a later post. 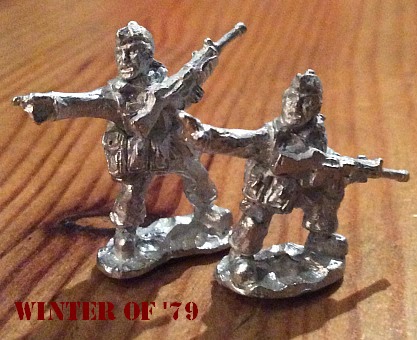 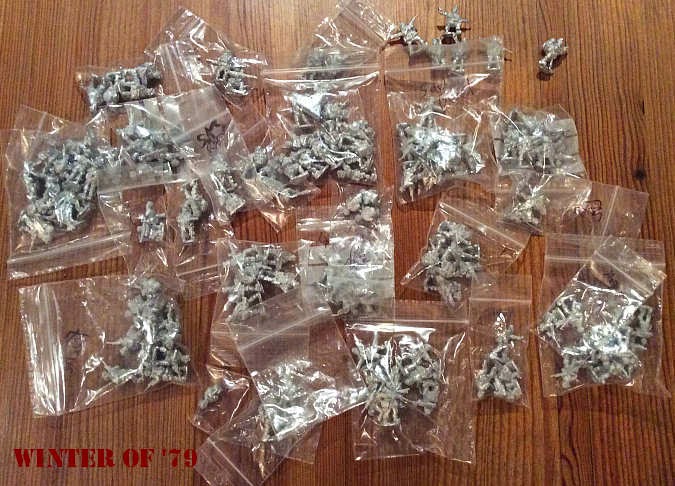 As usual, not one figure I can see has any discernible flash or a mould line. All the more incredible in this day and age when Rolf casts his own figures in his shed.

There's probably a few more figures here than I really need...cough.... but I like to have options and Rolf certainly provides lots of options within these growing ranges. Any extras will donate heads and weapons to the spares box or get passed along to Maff.

If I can remember where I've put that bottle of Windsor and Newton ink, I'll give them a black wash before taking photos of the miniatures from each pack code in advance of painting the figures.

Yes, if you hanker to set Winter of '79 in Glasgow hen then you can buy laser-cut card tenement kits from the Glasgow School of Art. 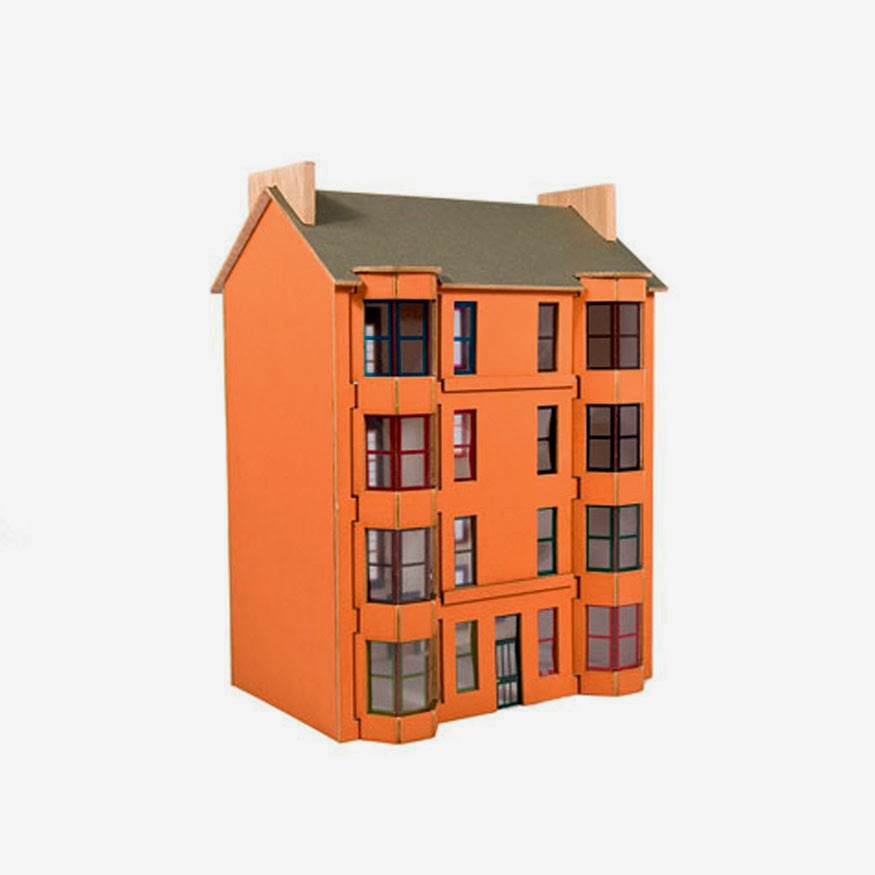 Reminiscent of the tenements of Dunbarton Road, fans of Glasgow based TV crime series Taggart will already be familiar with this style of social housing traditional to the city. Assembled, the model stands 12 x 17 x 9 cm and at £25 a pop they are comparable in cost to a single Hornby/Bachman 2 up 2 down house. 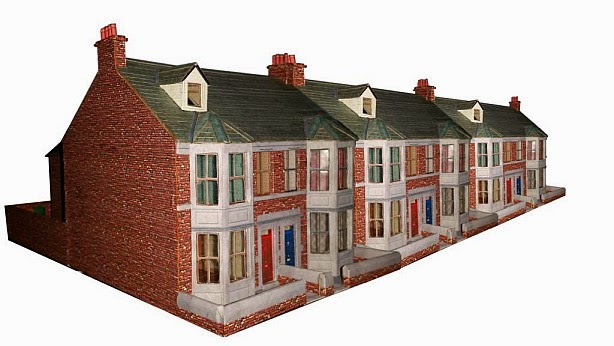 I also came across Smart Models, who offer these very nice OO download and print large terrace houses (RES06) which will be familiar right across the UK. You can choose from 3 different brick styles. They also offer a range of terraced buildings plus some useful laser-cut OO windows for adding extra detail.

I've stumbled across this interesting model railways website called Hall Royd Junction Box with a couple of cracking free buildings to download such as this small garage (home of Dodgy Don's Motors in the winter of 1979). 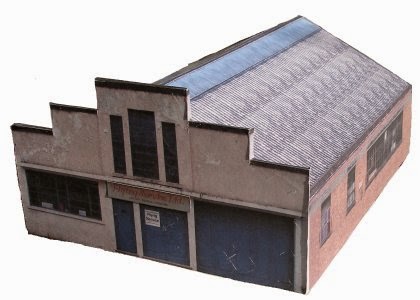 If printing your own models is not your thing, you can buy these models professionally pre-printed instead in four colours on 335gsm white card. The concrete garages above will prove very useful in most city, suburban or rural settings.

Tonight's game was merely an excuse to get some Vikings onto the tabletop with a borrowed setting from one of our favourite films... 13th Warrior. Unfortunately in these times of austerity and cut backs, there's only 7 Norsemen, but that didn't prevent Maff going in hard 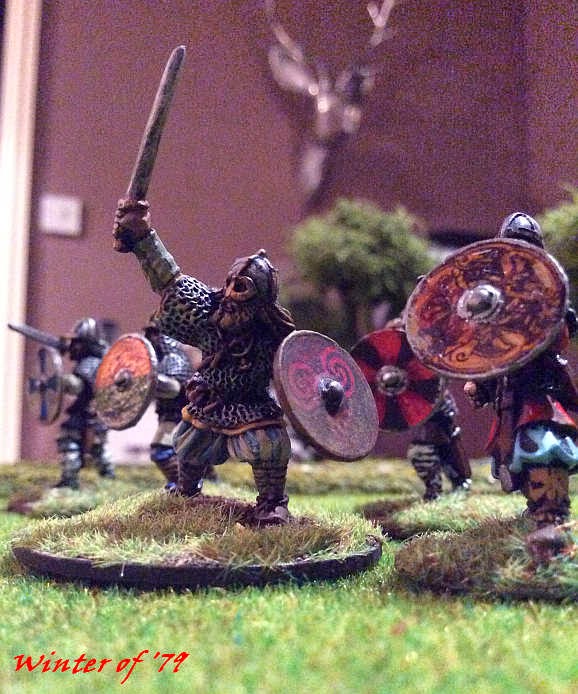 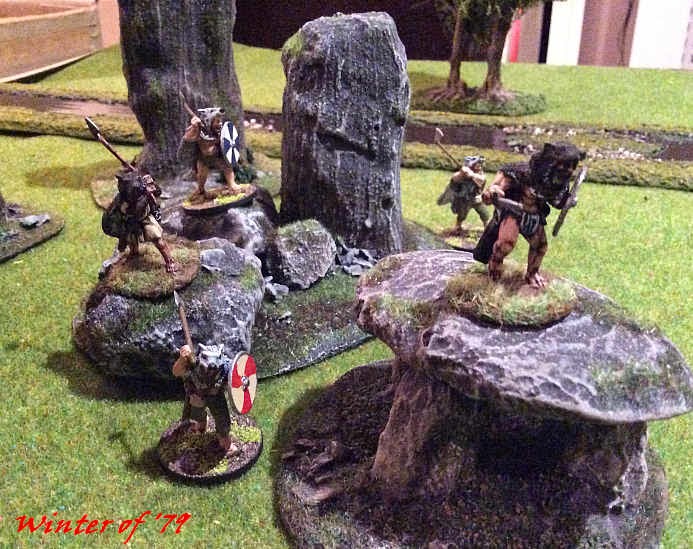 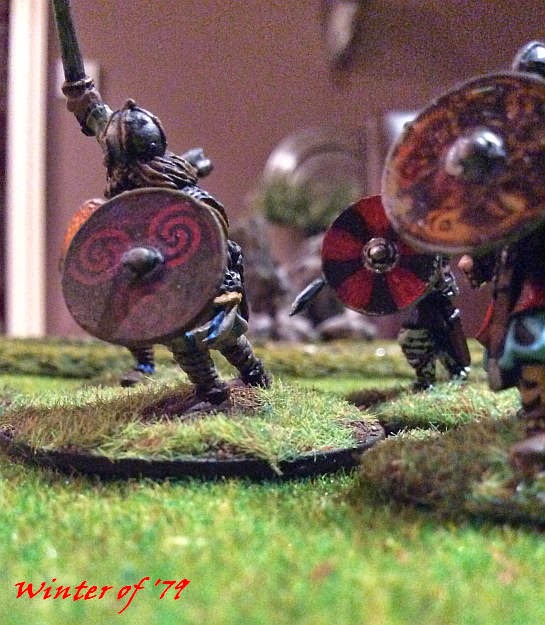 Sven, shouts "You dogs! We will feed you on your own bones!"
and leads his Hirdmen in a ferocious charge 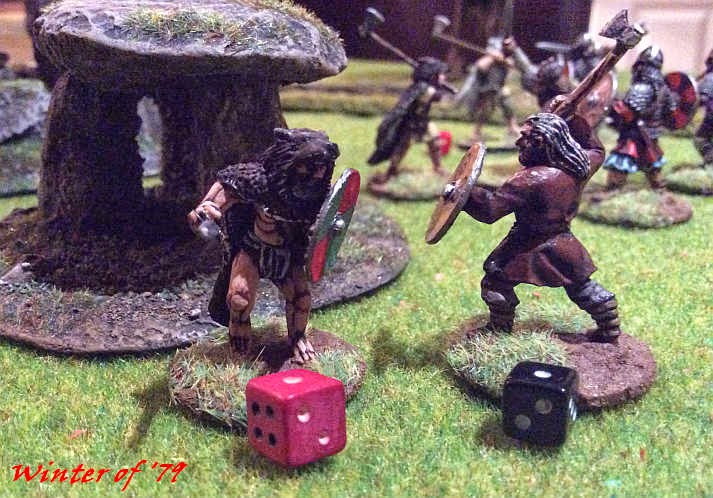 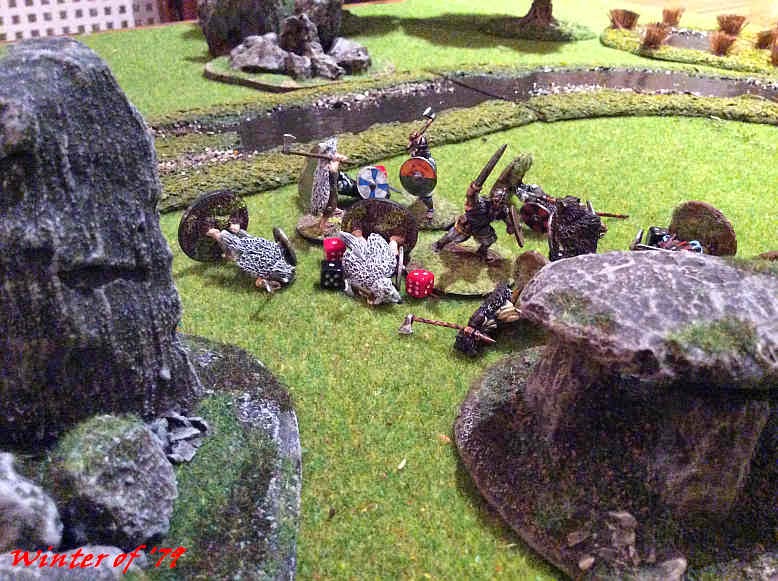 The final moments. Back to back the Norsemen are cut down.
Sven calls upon Odin to help him take as many as he can to hell....
before wounded, he succumbs to a Killing Blow from the Wenol leader.
Odin has other plans for Sven so we will see him again

The rules worked well despite the fact that the odds were stacked in the Wendols favour. I treated them as Viking Ulfednar with a +2 melee roll against Hirdmen plus Fast and Fearsome traits. The Fast gave them the advantage in the first round of combat and the +2 often gave them first blood.

We use a Combat Matrix based on charactre types for melee which has three levels of combat result depending upon the dice score. Whatever colour we try to give this table it essentially boils down to light and heavy wounds or outright killed. Character types can amass a certain number of wounds before the next wound of whether light or heavy becomes the killing blow.

Armour and shield modifiers may reduce the impact of a successful dice roll, downgrading a heavy wound to light, or light wound to no effect. Conversely a two handed axe or famed sword may turn a light wound into a kill for a Bondi or a heavy wound for a Huscarl.

A double six represents Saga Feat........ there's separate tables for that filled with various heroic acts pulled from the Sagas or movies.

The one thing to note is that this is a one dice roll combat system. There's no defensive roll. No saving roll. No return swing with the axe if you've been killed that turn. You are rolling on the outcome of the fight that turn. If the guy with initiative rolls high.... that's your bad luck. If he rolls low...you can steal initiative next tun and land a blow on him. It keeps the game cracking along at a pace.

Not to be out done by Maff, I've used my much quieter rail commute to and from work this week to draft Lock Stock n' Two Snarlin' Bondi for tomorrow night's game. Replacing Maff's swashbuckling theme from last week with tropes taken from the Viking sagas. 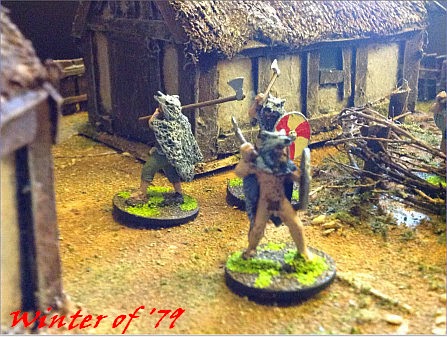 This is the last bit of irreverent fun we'll have with the Lock Stock system before getting nose to grindstone and focusing on an end of May release for the dedicated Winter of '79 inspired rules.

I've got to say that Kindle is a godsend! I have the app on my iPad, and it allows me to acquire and read books wherever I am. That half hour commute to the office by train has become a great opportunity to catch up on my reading or look up references.

But occasionally there's still the odd occasion where there's nothing better than having a nice hardback to flick through. Which brings me on to the latest addition to my personal reference library. Volumes 1-3 of David Barizlay's four volume work The British Army in Ulster. A lucky eBay find at just £16.99 for the three!

Heavily illustrated throughout with b/w photographs, each volume follows a set format; a diary of selected events during the years covered within the volume, an overview of IRA armaments, and then separate sections on British Army weapons, services and corps.

The volumes represent a decent enough introduction to the challenges the British Army faced during Operation Banner but lack any depth in regards to the changing threat and how the security services adapted to it. For instance, there's really nothing about the development of Land Rover protection kits and impact on the vehicles themselves. You'll find Craftsmen of the Army: The Story of the Royal Electrical and Mechanical Engineers Volume II 1969-1992 by JM Keenan and DJ Sutton to have a lot more information of interest about the vehicles and mechanical aspects of their role, not only about Northern Ireland but also in BAOR and Operation Corporate too.

The data on IRA armaments is very interesting from a Winter of '79 perspective, especially the number and types of firearms and support weapons available to the insurgency, but this information is largely repeated almost paragraph for paragraph within each volume. To sum up, great value for less than £20 for the set but the information is dated so I'd urge you to look out for cheap (under £10 a volume) deals, and certainly not worth some of the exhorbitant prices that even the single volumes can fetch on their own.

Tonight was the inaugural outing. The Deputy March Warden and his men have caught up with Auld Nat and the Sparkes family who are busy looting a border farmhouse! 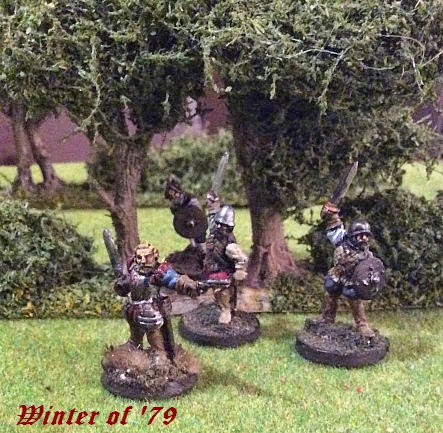 Our heroes are Gentlemen, Bravos or Lackeys (Humblies). Being a Gentleman, the Deputy March Warden leads from the front..... 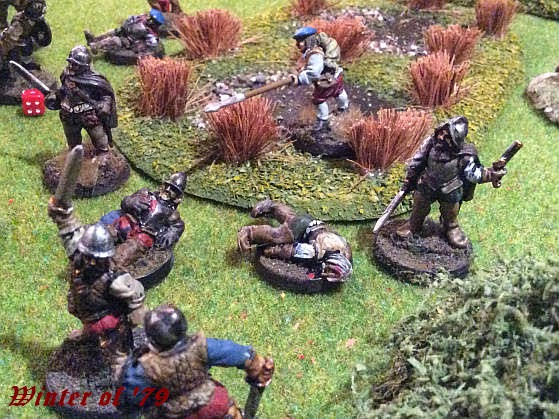 ....and is summarily dispatched by Old Nat's pistol. That fancy armour doesn't save him this time.

The Deputy March Warden and two of his Bravos had fired a volley of snaphaunce pistols at Old Nat and his two boldest Bravos who are rushing forward to meet them. Two of the pistol shots fly wide.... the third causes a minor Discomforture to one of the Reiver Bravos. Old Nat fires his own pistol in return... a double six! The Deputy March Warden is Shotte Through! and drops like a sack of tatties. Emboldened, pistols are discarded and it's time for the sword! 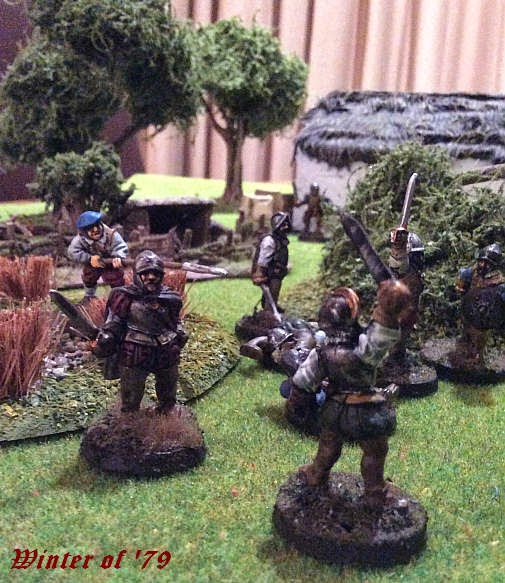 'Half pike will at you!'..... but only if the Lackey rolls above his opponent (modified) if he intends to close on him! 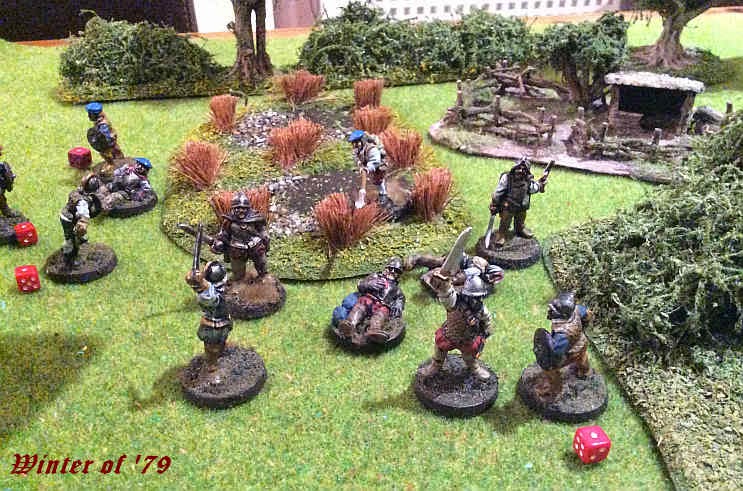 The melee! The Deputy March Warden and one of his Bravos lie dead. Two more of the Wardens men are 'Discomforted', so with their leader shot through and themselves clearly bested by the Sparkes', the Warden's men decide to save their hides for another day. All over bar the taunting in just three furiously enjoyable game turns.

This was just a test game fought on a 2'x3' playing area. Each force had 6 figures. In this case, Border Reivers by the late Jim Bowen with a mix of character types, arms and armour. The rules were a bastardised version of Lock Stock n Two Smokin' Sterlings which Maff had kindly converted to the age of swashbuckling and the flashing blade. Sadly, there was not much opportunity for buckling of swashes going on in this particular game...... Maff has created some nifty rules for that.... but it was still a lot of fun to play through. We both agreed that the game had the right 'feel' we would expect for such an encounter. Whilst only three game turns in length, we were happy with the result as we really don't want to spend an hour where 6 figures each are mincing around with swords trying to force a paper cuton each other. These encounters should be short, sharp and oten as not brutal with one side being 'Run Through' or giving up when all is lost.

Looking forward to the next game!