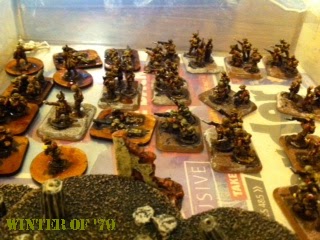 Too much DPM makes Jack a dull boy, so it is time to pack up our troubles, say goodbyeee to our loved ones, join Fred Karno's Army, ask Madamoiselle from Armienteres if she parlez-vous and break out the Khaki Serge.

Over the last month we hit a synchronicity about wargaming World War One which resulted in a rich stream of enthusiasm and creativity.  The result of this has been to launch ourselves over the top with a spirited cameo innings to plant the cherry well and truly in the trenches of 1916-18.

I can hear you asking, "Why 1916-18. Isn't that boring?"  The short answer is 'No' and I urge you to take a few minutes to read the introduction to The German 1918 Offensives: A Case Study in The Operational Level of War by David T. Zabecki, which looks at the evolving perceptions of World War One over the last century. You can see how these may have coloured your and our own understanding of the conflict.

Right now, we are feeling our way with regards to rules and we fully expect different rules will be used or made up to fit the occasion, especially as our approach to our wargaming of 1916-18 is very much in keeping with the Wipers Times. A test game with based but unpainted figures using Lock Stock 'n Two Somkin' Sterlings, proved it works very well with minimum of adaptations - notably replacing non-character individual figures with bases which fight as if they are a single man in the original rules. Our homebrew Arse-end of Empire house rules also work well.

Figures are based generically, with no single rule system in mind. This will allow  them to be used as sections/platoons/companies/battalions as we see fit. We are going with three figure small bases from Battlefront for flexibility and these look much better than you might at first expect. And there's plenty of extra character and command figures on one and two figure stands.

Maff is currently drawn more to 1916-17, Dulce et Decorum est and all that, fighting for some real estate around the Wipers (Ypres) salient. I'm preparing forces for Arras, Cambrai, the Kaiserschlacht.

The British are almost entirely from Mrrs Battlefront & Co. These are truly whizz-bang figures and certainly to my mind, the best yet from Battlefront. The castings are crisp, clean and well executed, with no mould lines or flash at all. Not been without trubble and having to contact Customer Services. Im definitely not buying any more. A handful of Peter Pig Square Bashers fill in for various necessary chaps and defaulters whilst Minifig trench raiders complete our 'bombing' parties.

The Germans are mostly Peter Pig (currently 8 units each of 4 bases, plus MGs, guns and trench mortars) with new Stosstruppen from Battlefront to add both colour and characters.