Elhiem: What A Carry On! 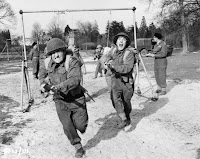 No. Stop Messin' About!  Seriously. We are kick starting the Winter of  '79 engines this winter with a quick look at Elheim's new Early Cold War British from the 1950's armed with the SLR, which was adopted by the British Army in 1957. Winter of '59 Anyone?

"Don't you think this is a trifle out of date in a world bristling with H-Bombs, Sergeant?"

Right now, the  photos on the Elheim website  aren't clear enough to view details so I have to assume they are wearing WW2 era Battledress. Also can't quite make out if they are wearing WW2 era tin lids or the Cold War era MK IV? However, the poses are good, the SLR armed blokes in ECB01 are IMO better than the similar 1970/80s BAOR11, who look like their mess tins can be heard half way to the Kremlin. 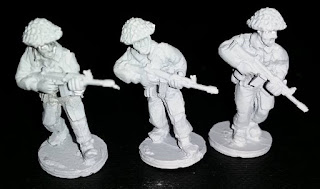 For Winter of '79 I'd use these guys straight out of the pack as militia/paramilitary types, possibly exchanging the helmets for  bareheads and berets to give them a more irregular feel. I'm actually thinking of an 'Iron Column' of ex-Cons in blue prison battledress. There's also two support packs, each with 3 squaddies armed with a Sterling, Bren.and bazooka (the M20 'Super' Bazooka). 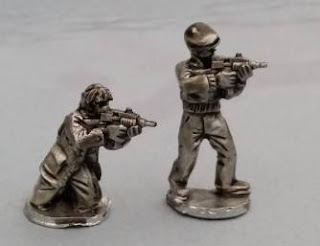 More immediately useful not only to our Winter of '79 games, but as 1970's European terrorists, undercover operators and special forces in mufti are IRE02 Irish GARDA Police Plain clothes armed with UZIs.