No sleep til Yell 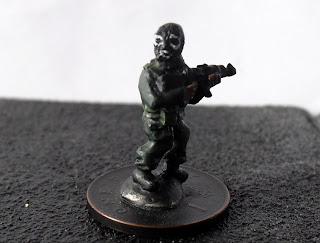 A special for Mark.

I am thinking these guys could be a heavily armed Gov hit squad. Just the thing for taking down disloyal Army officers or politician. I had toyed with the idea of painting some Saracens Black for them but have gone for unmarked or White vans.

Some armed Old Hotspur armed Police.
I have had terrible insomnia recently. But the good news is that I have managed to speed paint a load of 20mm figs. A small unit of 5 armed police and a 12 man special unit that I am hoping will appear in a game soon. Also finished at 0400 this morning were a load of ultramodern Russians. Only because they finished off a project started a while ago and everybody seems to be doing some just now.
Posted by majormike at 11:04