Good morning gentlemen! I'm Captain Frost, IO, 5 Para and my job today is to brief you on the Borset TAOR. We'll begin with the threat making the most headlines at the momement. The Armed Forces of Independent Wales aka to you and me as the Free Taffs. 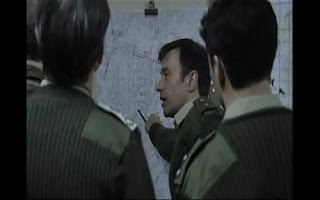 Though an always mobile and increasingly well-armed force, the Free Taffs have no overt military presence in Borset. That said, the OC Borset TAOR is very much aware that his western phase line is the Welsh Border and has deployed a screening force to deter any adventurous raids from the gunned up landrovers and scout cars of the Free Taff Mobile Columns. On the covert front there are reportedly Free Taff agents in Borset probably working on ratlines, infiltration and gun running; Op Dragon Fire netted a number of such agents along with at least one member of a PIRA ASU confirmed – despite rumours of a decision at the upper echelons of the Free Welsh leadership not to cooperate with known terrorist organisations. The Free Taffs are well aware that Borset is a logical jump off point and staging area for any ground offensive into Mid Wales – so it is in their interest to support any anti-government forces active in the Borset TAOR. Intelligence suggests that Borset is the limit of organised Free Taff infiltration into England – unless penetration agents of ostensibly English heritage were put in place during the slide into crisis, which is currently discarded as a possibility.
Forces present – no more than a scattered dozen, very lightly armed personnel who will seek to avoid contact unless unavoidable.

PIRA and asscoiated Irish sympathisers have extended operations to the mainland  in support of anti-government forces. No doubt they hope to capitalise on the present instability. There are two known ASU cells remaining. One in the environs of Borset here, and the other operating within the Irish community based witin the housing estates of East Felpersham. Deatils of known members, operations and modus operandi are in the folders you have signed for.

Whilst no formal military activity by these ASUs has been identified to date, we can't expect that situation to remain. What is certain, is that they are training and arming local Trots.

Right! Let's look at the Marines.

There are no formed units of Marines operating in the Borset TAOR. To date there have been a number of raids by formations up to reinforced platoon size which have been aimed at disrupting communications and hampering our supply build up.

Patrols have come into contact with small stay behind parties consisting of both Marines and Cadre personnel. It is likely that their role is to provide intelligence, attack targets of opportunity and organise local resistance. Most contacts have been in the Hassett Hills and corridor formed by the A1992.

Again, you'll find more details in your folders. We'll break here for tea and Garibaldis before taking a closer look at the Trot and Trade Union anti-government para-militaries and armed youth movements centred in and around Borset and Felpersham.