I collapsed at work not once, but twice in April which resulted in a trip to A&E by ambulance and I've been off work since. Since my visit to Neurology at ARI a fortnight ago now, my mojo has been on the wane. Painting, modelling and gaming have all but dried up. The stress of being off work, of losing the ground I've fought to gain over the past three years, the uncertainty about my neurological condition (Ive now had my driving licence suspended) and natural fear of the future has all had an effect.

Looking round my study over the weekend I'm tempted to ditch all my 15mm Sci Fi. In fact everything bar my 20mm Moderns, 15mm & 28mm SCW.

I may just narrow it down further to focus on 20mm Moderns over the next two months to give myself the space, mentally and phyically to bring Winter of '79 to full life. So the loft awaits everything else. Hopefully this refocusing without the distraction of other wargaming periods will help me turn the corner next week and bring back that mojo.

I sprang for a cheap copy of Nick Vaux's MARCH TO THE SOUTH ATLANTIC on Ebay after immersing myself in post Falklands War reports and analysis.What you get is a bloody good read and a no-nonsense,  “diagram of life” as Edmund Blunden once put it, of 42 Commando's war at the operational level. It's a bit light on Mount Harriet and of the sort of wargamer fetishistic detail I was hoping for about actual company and platoon (Troop) organisation in the field. A good book of it's genre which single-handedly demonstrates the effect of 'friction' or just pure bad luck on the battlefield and how it can shape both the outcome of an operation or the fate of an individual.

Maff and I admit that we hate putting together Metcalfe cardboard kit buildings or similar. This has led to a sudden eureka moment where I came up with a cheap, simple but effective solution of creating inner city terrain using model railway 'backscenes' (aka 'backdrops' in US). 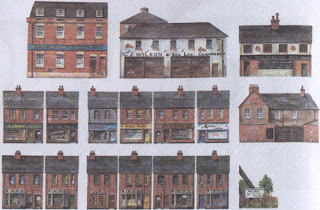 Of course Antics Online are currently out of stock.... yes, I could easily make my own, but its cheaper to buy these backdrops than use up printer cartridges which I can then save for one-off specials, or printing brick paper for steet corner side walls etc.

We figured that in riots and low level urban conflict or Geezer style shoot-outs the majority of the action is going to take place on the streets not inside the terraced houses, shops, etc. So why not just make it easy on ourselves and create an urban 'film set' for our games with the 'backscene' houses replacing model ones. As we are no longer dictated by the depth of model buildings, we can cram in an extra road or two. And nothing to stop us creating the odd snipers perch or two. Cost wise, we're looking at two terraced streets plus a T junction for the price of two Metcalfe card houses.