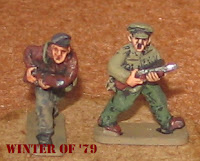 Playing around with my 15mm SCW tonight. The kitchen table lay bare of any and every bit of Christmas clutter and was all mine. These are some of my original Peter Pig' Thaelmanns.

Maff's been called away on a family emergency and the stark realisation hit me today as I sober up after the Christmas break, I'll sober up from New Year some time in March; that I have to co-ordinate a launch to 800 stakeholders in little more than two weeks time.

So I swopped red beret for pasamontana and SLR for Mauser. Figures were on the table and I thought, you know, I need to immerse myself in building things. Distraction therapy, pure and simple. So I sat down with a cat food box, knife, hot glue gun and a bit of imagination to blitz half a dozen Spanish rural fincas. These can best be described as single room hovels, sometimes with an attached donkey or tool shed.

Why fincas? Well, I just find that most commercial 15mm Spanish buildings are a bit too Place in the Sun for my tastes. How did the fincas turn out?  A resounding so, so! But the techniques worked well in this scale, leaving me inspired to build upon tonight's successful if underwhelming efforts with a more detailed batch of fincas tomorrow. And not unimportantly relaxed.

Looking at these litle buildings now I'm thinking....base them - pile of stones, logs, olive tree, and or drinking well, shrubs and grasses - they'll look great. But I've caught the bug and have an endless supply of cat food boxes.