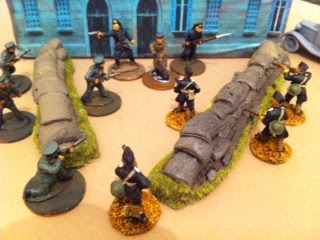 As Father Ted Crilly might say "You can't put down a good revolution".

The Craggy Flying Column was formed three days before the British withdrew from Dublin. When the news of the War of Independence reached Craggy Island, the Column split between Free Staters and Bitter Enders.

The Free Staters lost to the Bitter Enders after a vicious fight with Hurley sticks at St Kevin's Turnip.  Weapons arrived on the island a month later when the MV Artizan with a cargo of firearms destined for the IRA Tipperary Brigade,  including a number of Tommy Guns, was abandoned in a storm and run aground. The ammunition was lost though, and has to be manufactured locally from empty jam tins and tuna cans.

Enough arms were found for every man woman and child on Craggy Island and so newly equipped, the Flying Column declared war on the Craggy Garda. Off duty the Column drank in the snug of the Craggy Hotel while the Garda propped up the bar. The lads of the column are well disposed to Father Ted Crilly who they see as a like minded rebel and will often turn out to help him in a crisis.

The Free Staters on Craggy Island leaned to communism following the arrival of Rosa Leichtenstein, a German emigre and 'lovely girl' who worked behind the bar at Vaughans. Calling themselves after the Spartacists the lads invited Ted to join to poke one in the eye of the Flying Column. Ted accepted believing them to be a football team, having visions of scoring winning goals and being picked up by a talent scout for a big club in England.

Some of the arms from the MV Artizan together with blue uniforms destined for the Free State Prison Service washed ashore on neighbouring Rugged Island. Father Dick Byrnes, supported by Bishop Brennan fell on this opportunity to form the Papal Legion as the armed branch of the church in order to counter the moral slide he believed was happening on Craggy Island and elsewhere.

The spark......St Declan's Day just before St Patrick's Day and just after St Finbar's Day, the shop steward of the Craggy Postal Workers Union suspects that donations to the Church are being launderated in a post office account belonging to a local priest. He immediately denounces the Pope, declares a Trotskyist State and leads the Postal Workers to man the barricades.

Father Ted Crilly on hearing of the trouble, fearing for the funds resting in his account, hopes to smooth the waters and so leads the Spartacists from Vaughans to the Post Office on the pretext of challenging the postal workers to a "jolly old football match".... only Father, now also Commandant Byrne, has heard that Ted is leading an evil socialist putsch and has dispatched a column of the Papal Legion to Craggy Island..... A Very Craggy Civil War is about to become a footnote in dusty history books.

Perhaps because of my heritage I do have a hankering for the Irish Civil War. Perhaps because we both like the figures by Musketeer, but one inspired Wednesday evening letting off steam about work, we came up with the idea of a setting on the fictional Craggy Island of Father Ted fame. Then using this as a non too serious background for irreverent Interwar, Pulp and Call of Cthulu games. Yes, Father Ted Cthulu! Well the whole sleepy English village thing is done to death.  The Craggy setting allows us to create madcap factions using our favourite figures and rustle up a game or two in an evening with little to no effort.


So what's this got to do with Winter of '79. On the face of it nothing, but you know, just doing something instant, madcap and off the wall can lead to a change in perspective. Same is true of wargaming. It could have been Craggy Island it could have been Dublin or the streets of Moseley's London. I've recognised that I'm taking Winter of '79 too seriously again and the freedom with which we've put together factions, thrown figures on the table and started rolling the dice with A Very Craggy Civil War is something that I should be doing with Winter of '79.

I know many of you love the narrative approach, but there's definitely room for both. As a result of Wednesday's Very Craggy Civil Wargames I have some fresh ideas. Watch this space.