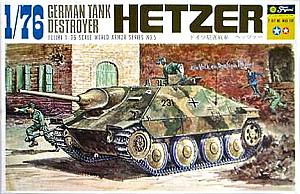 I wonder if my affinity with urban combat started as a kid, playing in the back streets and alleyways of suburban London?

Or was it sparked through discovering the artwork on wonderfully exotic models like this Fujimi Hetzer, which was completely outise the narrow horizons of world of war 2 with Airfix as popularised by Don Featherstone.

Of course this is way back, when John Saunders was making the 8th Army trucks out of cardboard and tar - queue the Hovis music...... but before I go off on a rambling reminisce about Charles Grant and Battle - Practical Wargaming (I still have my original copy from 1970), let's talk about gaming Berlin. 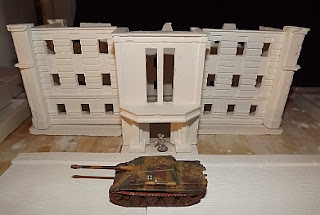 ....more pictures here: Model Buildings by MOD. Now this is a building worth storming! This commits me to the project. Once the building arrives I can start planning the board though I have some initial ideas based on the layout in the Red Square Mission (M15) in the original Ghost Recon xBox game.

So, with the Ministry of Ersatz Production bought, I started going through my boxes and found some goodies that are perfect for Berlin 45 'Airfix' style. Lot's of little zip bags of left overs or spares, and odd figures kept turning up. For instance, 12 first edition Battlefront Russian riflemen. Beautiful models in very human combat poses. Given Milliput capes they'll be ideal. A bag of Peter Pig German Tank Hunters in cap. These are slightly smaller and thinner than the other German figures, painted in black they will become my nominal Hitler Youth force. A bag of first edition Battlefront Late War German 'discards' who may now find themselves becoming Volksturm, party officials or similar local defence forces/alert units etc with the odd headswop and/or Milliput greatcoat. And so on. Then result, an unopened Sdkfz251/22 with 75mm PAK!

Maff and I have agreed to continue using the Flames of War small bases, each with 2-3 15mm figures. This proved successful with the Axis and Allies Miniatures rules and in the case of Berlin 45, will enhance the look, be practical on the urban tabletop and also allow us to create fun little character bases, mixing and matching as we see fit from any odds and sods we find. Above all, I think it will help maintain the necessary sense of fun that's important to us.