Adding to our Housing Portfolio

Winter of '79 is regrouping in the hills, readying ouselves for the next push into the urban centres. 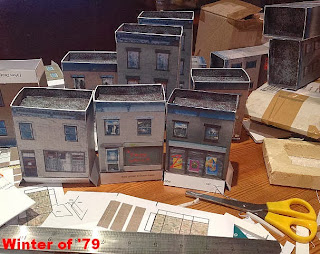 An entire Saturday, printing, cutting and gluing resulted in 15 of Tony's Urban Decay card building range put together. Managed to mess up one through rushing and left four more for 'super' detailing at a later date. 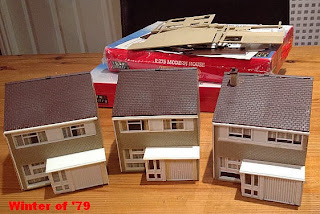 My 70's housing estate continues to grow. Been picking up these kits on eBay when they've been relatively inexpensive. Bachmann brought out a similar ready built OO scale 70's detached last year which is very nice but at £25 a pop I've understandably held back and taken the eBay option for these OOP Hornby kits.

These houses are representative of the housing boom in the late 70's and eighties. They filled suburban estates on the edge of cities. In some more industrialised towns they would be close together, probably with a small patch of grass and tarmac driveway out front without any boundary walls or hedges. Elsewhere they could be set apart in closes where children could play safely. Each with long front gardens, walls hedges and trees.

As time wore on the kitchen would gain a flat roof extension, the garage converted into a bedroom and a sun lounge added. Additional bedrooms would spring up in the eaves, often with ugly dormer windows.

These estates might grow around existing Victorian housing for professionals or on the edge of Trading Estates. At their centre might be a purpose built shopping arcade, often attached to a public library. Sometimes in the larger developments an enterprising home owner might convert their corner house into a newsagents or convenience store.