Following on from my previous post in the early hours of this morning, thought I'd take a break at this stage to show you some of  my efforts so far. Heads are just blu-tacked into place for now, prior to being drilled, glued and having collars/facial detail rebuilt with Green Stuff.

First up our eponymous Victorian hero, Freddy "Umoboko Gorge" Pirbright. Fagged for Potter H. at Scones and a demon in the outfield. 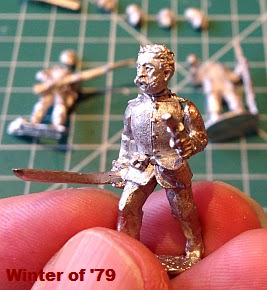 The head has been taken from the cook in Empress Miniatures' ZWB63 Rorkes Drift defenders! Body from Foundry DA15/1 British Command Characters.

Next, a variation on the movie version of Henry Hook from Empress Miniatures. I took the head off the Hook figure drinking from the bottle in the Empress Hollywood Heroes pack and will be attaching it to this body taken from Foundry's DA15/4 British Infantry Characters. 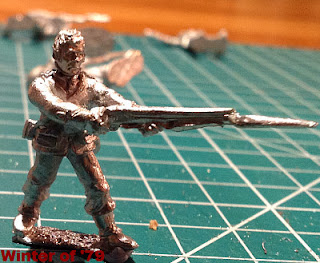 I may change my mind and use the historical Henry Hook body in shirtsleeves from Empress Miniatures ZWB39 but I'm really happy that Hooky now looks like he means business.

So, now the original movie Hooky's body is 'eadless, what do we do with it? Hands up here, I bloody hate square-on standy around figures, don't understand why gamers would want to buy them myself? In this instance, we use the head taken from the Foundry officer in patrol jacket who is drawing his pistol, marry the two together.....and we have O'Reilly, inept political agent, corrupt trader & Irish adventurer to fate. 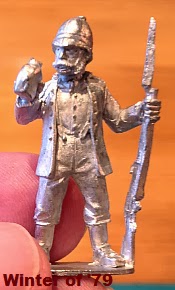 That head was a sod! Took best part of half an hour of careful cutting at different angles before I was able to remove it without damaging any detail on the figure, the head or my fingers. What made it harder was the rear of the sun helmet came down over the collar . I decided in the long run it would be easier to preserve the shape of he helmet rather than recreating it with Green Stuff. 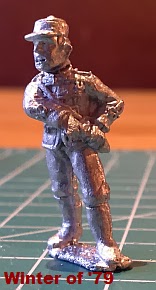 And finally, before I return to the cutting mat on the kitchen table....Dr Watson in patrol jacket? One of the necessary but unspeakable Corps chappies? Definitely needs more facial hair though, clean shaven he looks too much like Ben Affleck rather than a Victorian gent at war and that will never do. So maybe this head instead taken from a Black Tree Design figure, for the last stand around the Mess. Last man standing pays the Mess bill. 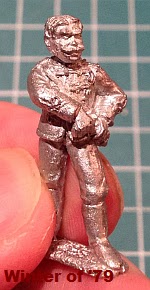 If trying this yourself, and I know some of you are proficient, I recommend surveying the model before you start to determine the best and safest cutting angles. If the figures needs to have mould lines or flash cleaned, nows the time, especially around the head. Unless the figure has a pronounced neck, rather than cut straight across, I angle my knife slightly down and will cut from each side, producing a V shaped cut. I find this the safest way and it usually prevents a slip of the knife or too much pressure applied in error (or frustration) slicing off the figure's chin/jaw or drawing blood. I then make smaller cuts front and back following the best line to join up the cut, applying pressure as necessary.  It can be time consuming and hard on the fingers, but worth it to create some unique characters if like me, you are not a whizz with Green Stuff.