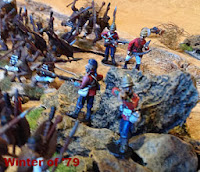 You don't need half a ton of MDF masquerading as Victorian brick to enjoy In Her Majestys Name. Here, a young Freddy Pirbright leads a patrol of the Benson and Hedges down the Umboko Gorge to chastise Chief Catawali for some colonial misdemeanour.

With only a dozen redcoats on the table the game provided all the majesty, tabletop colour and thrills of a fully fledged battle utilising larger forces. The game ebbed and flowed, balance shifting constantly. And it was fun! 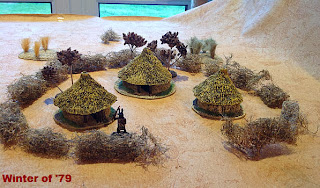 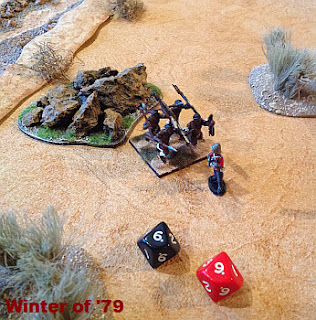 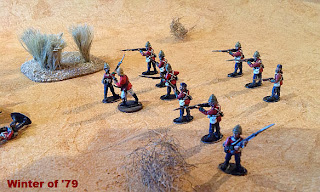 Our trusty Sergeant advises Freddy to wait for the cavalry 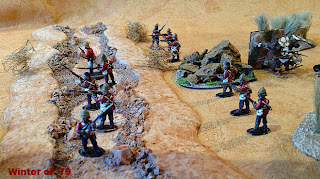 Nonsense! Freddy crosses the Umboko
in skirmish line with supports 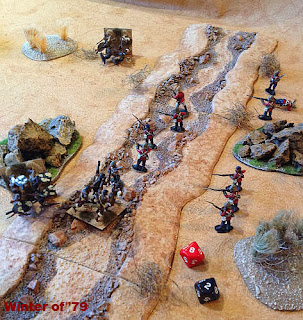 An sniper on the terraces and another ambush take their toll 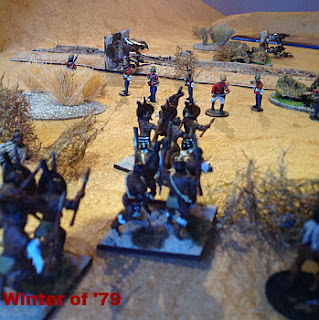 Closing on the kraal, the Umboko Regiment
launches it's horms of the buffalo attack 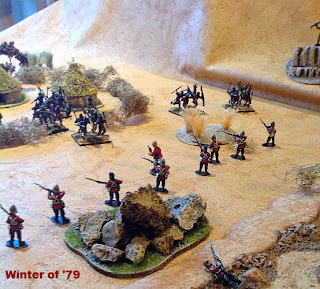 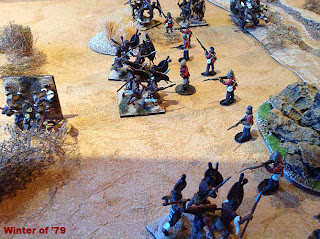 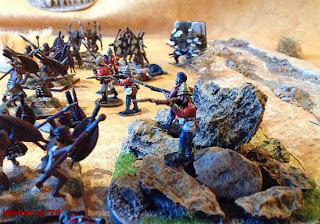 Hard pressed. The power of the Martini-Henry wanes 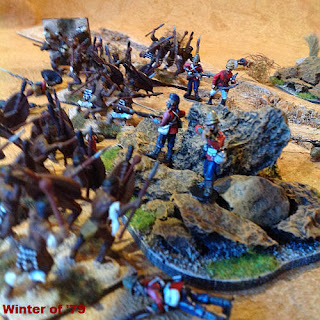 The final stand. Down to bayonets now.
Freddy Pirbright makes off to save the colours

I learnt a lot about IHMN mechanics from this encounter and concocted a few house rules of my own during the course of play (such as scouting, figures fighting back to back/back to wall or as in this case rock). Well you have to don't you? Afterwards I tried out some further ideas whilst I still had figures on the table, but these need more testing, eg, the effect of leadership on shooting, all enemy bases in base to base contact (or in a contained area such as an alley, gap between rocks etc) becoming eligible targets for Volley Fire.

Using Zulu warriors on multiple bases certainly upped the visual and theatrical impact of the game. I'll base the rest on skirmish bases with the intention of replacing one of the warriors with a casualty figure to show when they are 'Knocked Down'. I made up stats for the Zulus and created some Traits using those in the rule book as examples, such as 'Iklwa' being their equivalent of 'Bayonet Drill' (+3).


Well there we have it, a simple scenario leading to another thrilling game of In Her Majestys Name. When I was a lad, one night in 1975 my dad came home and gave me Skirmish Wargames by Don Featherstone. It was completely out of the blue and not like him at all. I was immediately enthralled by Featherstone's new book, beginning a wargaming odyssey that night that and today's game with IHMN has recaptured those feelings.