This week has gone to hell in a handcart and next week isnt going to be much better. We are in the final count-down now to end of H's tour of duty at university. Next Friday it's all over and done with. What can I say but Thank F***!  But in the meantime she has to finish her dissertation, give a presentation at university, give a presentation to the company where she is an intern, and sail through a second interview (including presentation) for a major position with a leading Scottish company. I'm sure you can imagine that stress factors in the house are at an all time high.

We've also had THE referendum this week. Many of my colleagues plus some of my team were directly involved working at the polling stations. They are all very proud to have taken part in such a historic event and returned to the office yesterday with amazing tales from the front-line of democracy in action.They were bouyed up by their experience in a way I've only seen in volunteers from the Glasgow Games and London Olymics. As for me, with the exception of following the Scottish Independence thread on ARRSE (not for the faint-hearted), I blindedly ignored the media, the leaflets, the campaign, the personalities et al to make my own informed decision based not on flags or fear but a balanced view which lay somewhere between head and heart.

To help me ignore the political chaff, I've read a lot over the last two weeks or so. With a 35 minute train journey each way plus 10-15 minutes in the waiting room in the morning, I can get through a lot in a week, especially now I have the Kindle app on my iPad.

Too Far Too Few, is a tribute to Naval Party 8901 and their defence of South Georgia during the Falklands Conflict. It gets you into a bootnecks mindset but be warned that the salient battle for the defence of South Georgia is limited to one short chapter. I bought this after The Yompers (Kindle edition), about 45 Commando in the Falklands. It follows the all too common We Heard, We Sailed, We Landed, We Yomped, We Fought, We Lost Mates, We Won, We Came Home formula. Reasonable account of Two Sisters but had disappointing maps.

Also picked up Nine Battles To Stanley by Nicholas van der Bijl for 2.99 or so on eBay. All I can say is it's a poor man's version of Hugh Bicheno's Razors Edge. Bicheno wins hands down and in fact I use the very detailed battle maps in Razors Edge to follow the action described in both The Yompers and Three Days in June (Kindle edition). If you don't know Razors Edge then all I can say is that as a wargamer it is THE one and only book you need to read about the Falklands. 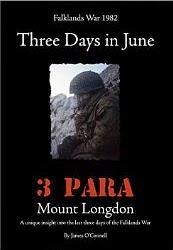 Three Days in June by James O'Connell I've had for about a month now and thoroughly recommend. I just keep going back to it. It's Mount Longdon from the mouth's of the Tom's who fought there and is superb if you want to get into the mind of soldiers in action as they fought from rock to rock. The book also includes lots of photos of 3 Para with 16 photos of Mt Longdon which help get the scale of the place, location of participants at given times and course of the battle as it unfolded. However,I still found I had to use Bicheno's map in tandem with reading the text to have real clarity of the actual situation. I felt the Kindle format detracted from the fact that with a real book you can more easily flip back and forth between pages to study maps and photo.

Gaming wise, the Enfilade 20mm SAS arrived mid-week. Put an order into Matt at Elhiem for a a clutch of 20mm 'Nam figures on the back of the fun we've had with Lock Stock... Don't be surprised if you find a Lock Stock 'n Two Smoking Hootches (or similar) variant in the future.