Little Chef: Some Corner of a Foreign Field Playtest

Jeanette absent mindedly leaned on the counter. It had been another busy day at Little Chef on the south lane of the East Whittington bypass. The customers were mostly soldiers these days, and by the lorry load too. There was still lorry drivers, families going on holiday and the odd travelling rep, but there were far fewer than when the crisis began. Most families who stopped had cars piled high with personal possessions. She felt sorry for them. As short order cook Jeanette had lost count of the number of gammon steaks and pineapple she'd cooked on the griddle. Takings were good today at least and that would please Terry, the manager. It was almost end of shift so he was in the back doing the reconciliation from the tills whilst Pauline, was out front conspicuously cleaning tables in an effort to hurry away their last customers. Right now Jeanette was looking forward to the end of her shift, getting her feet up in front of Coronation Street with a big mug of tea and a Mcvities chocolate digestive. 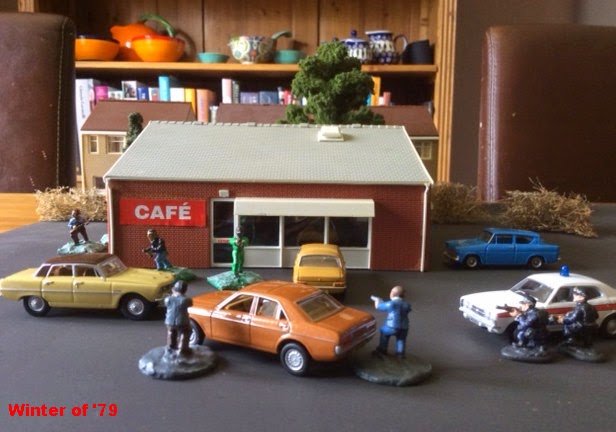 Baz had noticed something wrong with the Rover and it's occupants back at the Saville Heath Petrol Garage when he'd gone back to collect his Green Shield stamps. "Missus will kill me. Saving up for a new ironing board". They tailed the car at a safe distance. The driver of the rover seemingly unaware that he had been rumbled by Baz and Daz of 13 Close Reconnaissance Company in a souped up but heavily fortified Q Car. When the Rover pulled into the Little Chef, Daz smiled "Got 'em!". 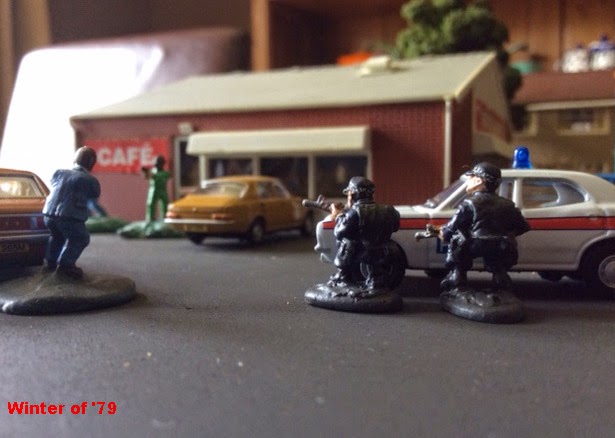 Sergeant Fry of the East Whittington Special Patrol Group was just taking his first bite of a Curley Wurley when the "All Armed Units" call for assistance came over the radio.  When Dispatch "Foxtrot One Two, Foxtrot One Two, be aware, armed undercover army personnel on scene", Constable Baldwin turned to his partner "Sounds like we are heading into a war Kev!". 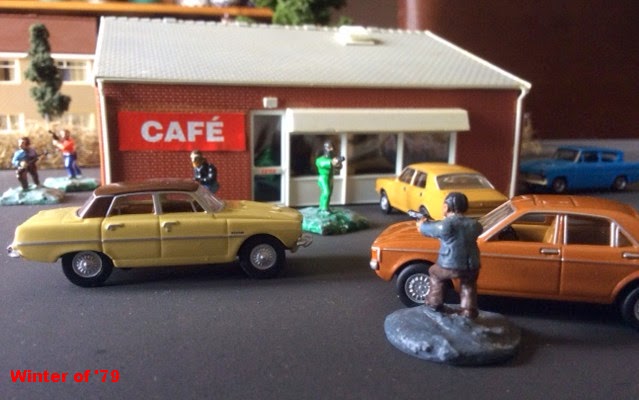 So this was the setup for my play test of Some Corner Of A Foreign Field, modern skirmish rules kindly sent to me by Matt of Morningstar Productions. I took to the rules straight away on first reading. And it wasn't a lot of reading because Some Corner Of A Foreign Field (SCoaFF) are only two pages long. Yes that's right, two pages like the One Cell wargames rules emanating from Wargames Developments back in the 80's and early 90's. 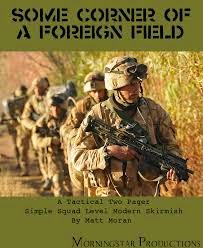 I deliberately chose this scenario as it had to be fun for me whilst play testing but allowed me enough characterisation to test the rules several times using different quality stats - called Skills & Drills (S&D) in SCoaFF to measure the effect of the different levels. The houses behind the Little Chef had gardens which would allow for a running battle if it came to that.

SCoaFF uses D20, familiar with RPG players. It is dead simple to pick without the learning curve of other similar modern skirmish rules and flows smoothly allowing you to concentrate on the game not the rules.

There's no rules for vehicles or heavy weapons as the game is clearly focused as a squad level skirmish game and is no poorer for that. Integral support doesn't generally go higher than platoon level though MGs, company mortars and snipers can all be brought into play as off board support elements if required by the mission. This is because the intended engagement zone of this game is about 500-750 metres square on a 4x4 board (give or take). For most major assets this would be danger close, particularly once the two sides start to mix it up.

There are 5 Skills&Drills levels, 1-5. All else being equal, you will find that a model at one S&D level is worth 1.5-2 models at the next one down (i.e. 4 S&D4s are worth 6-8 S&D3s). The set-up of your scenario (eg ambush) and weapon mix will alter that of course. In the play tests altering the S&D for various  figures had a significant role in effecting the outcome.

A neat touch is that combat builds up Stress levels throughout the game and effects morale which differs depending upon whether you are regular or an insurgent. Having just re-read Brains and Bullets: How Psychology Wins Wars by Leo Murray for the THIRD time this month, Some Corner Of A Foreign Field was very timely and speaks to me to a degree where the two become the same.

Stretched out with colour pictures and associated fluff I could easily see this as a contender for becoming an Osprey rule set. As it is SCoaFF definitely packs a punch above it's weight in pages and everything is there to play a robust squad level game on the table that equals Battlefield or Call of Duty Modern Warfare on the Xbox with minimum of fuss and maximum enjoyment.