Call of Duty: Return to Sender

...... Russia: 2008, somewhere in ultra-nationalist territory....... the lads from Benson & Hedges Two Zero find themselves on the run from the bad guys. Their pursuers have lost the scent. A shattered village provides cover for the night. All is quiet.....when a BTR patrol noses out of the forest and edges down the high street. 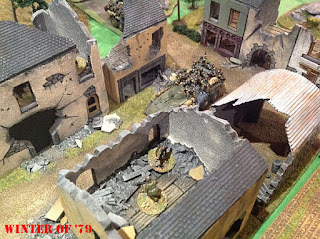 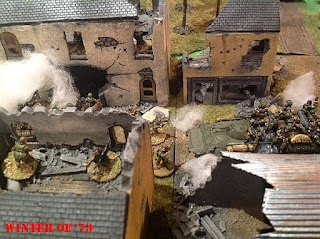 The surviving bad guys leap or are thrown from the BTR. Ginge rakes them with his SAW. The second BTR retaliates knocking the merry-hell out of Ginge. The riders jump clear and take cover. The remnants of the lead BTR's riders melt into cover. 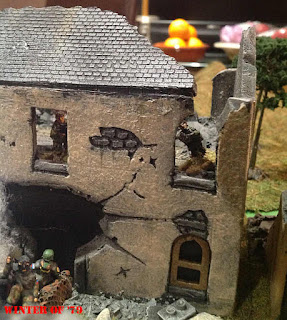 Gaz and Ginge are in the thick of it. Taking the worst of the bad guys fire. Surviving bad guys go firm at the base of the village and start pushing forward. Ginge is in no state to be moved and covers Gaz as he makes a dash to join Daz.

The bad guys rush the yellow house just as Baz and Daz decide enough's enough and lower themselves to the street below. Under fire the remainder of Benson & Hedges Two Zero slip away into the dark. 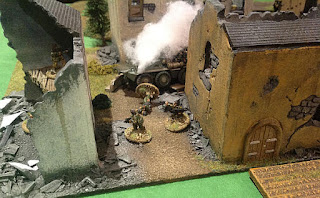 A simple scenario. A quick and bloody but fun game on my new village terrain tiles from Chris at CJs World Wargaming Terrain. The village has real character and is a delight to play in. I'm reminded of the years of toy soldier and then wargaming fun I had as a kid playing on the Bellona vacu-form ruined 'city'. No, stop me before I get all dewy-eyed.

Tomorrow night, we're in the Caucacus as Russian forces bring the Tiger of Zlatava to ground.