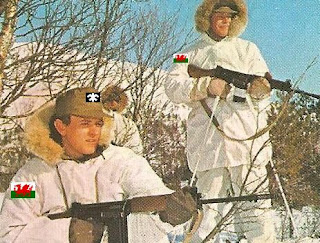 Given the weather in January it seems appropriate. It's been a funny few months - I think that Mark and I had hit a wargamming stride last year but then with september came a whole load of things to deal with on all fronts and gaming took a direct hit. Still, the groundhog of wargaming seems to be poking his nose out and blinking in the sunlight. Part of this has been a few diversions - 15mm sci fi, 28mm dark ages, 28mm imagi-nations and 15mm portable wargaming. I dont propose to flog on too much with them here as I think you gents are mostly fans of kensington sten guns but here goes: 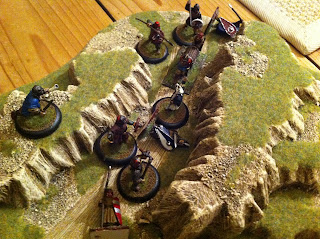 Bishop Leonard of Spinalonga loses the Papal taxes to Tranlavonian bandits - for which he is exiled to the Bishopric of Hibernia. Very short game played with Heroes of the Dark Ages by Dave Millward. Yes, its back. 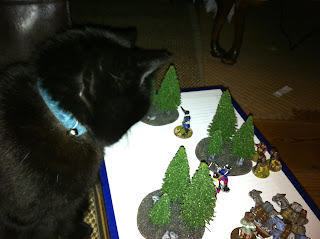 A Freidonian supply column struggles with snow and hostile Sandusky indians somewhere in Neu Prussia sometime in the 1750's. Not a good day for the Freidonians though the muleskinner got away. Closely monitored by the local feline population. Rules - err sort of from MOHAWK, the ace boardgame of the FIW. 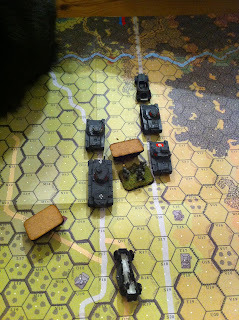 15mm early war Wehrmacht run amok on ASL maps (Kampfgruppe Peiper as you asked). Rules - from Portable Wargaming website - thanks Bob! Warning - does not work with anything bigger than a Pz38(t). 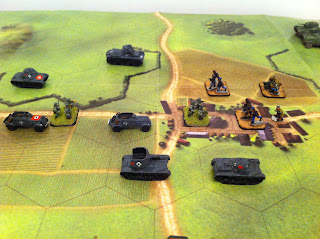 Takes a deep breath....15mm Wehrmacht envelop an NKVD detachment sometime summer 1941, map....Axis & Allies, rules - Bob Cordery strikes again. This did seem to work and YES a Tiger will fit on those hexes! 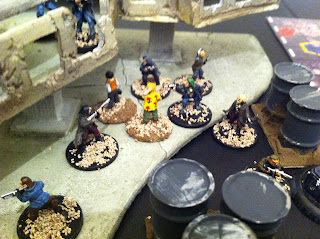 It all goes to ratshirt for a civ in Meta City One. What happens next? You be the Judge, find out at The Zone for sci fi thrill in 15mm.........

So, with that and Mr H hopefully knocking them out with his presentation next week, who knows perhaps normality may assert itself.