An Eye For An Eye

Following the shooting of a junior member of an Army Council on Boxing Day. The Police have announced that they are searching for Alan Tate, 26, from the Bristol area, who is believed to be responsible for several other shootings and terrorist incidents.

Anyone who has information that may lead to his arrest is encouraged to call the confidential State of Emergency hotline, 0990 0990. 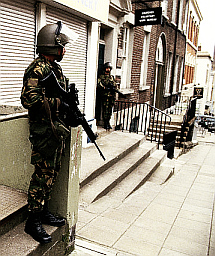 It has emerged that Brigadier Raymond Barret was gunned down as he left the property of a close acquaintence in Chelsea and died at the scene. Eye witnesses report that the gunman wearing an army greatcoat, fired several shots at close range and made his getaway on a white scooter. The area remains cordened off whilst the Police conduct their investigation. Brigadier Barret's wife has been unavailable for comment and remains at their Suffolk home.

Other news. Bread production rose in the last fiscal quarter........