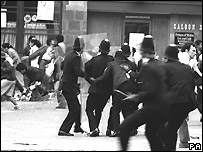 The National Archives have just released papers from the Prime Ministers Office relating to the civil unrest in the major cities of the UK in 1981. Concentrating on Toxteth in Liverpool and St Paul's in Bristol.

What we see are a wide range of papers, including the more high profile transcripts of the telephone conversations between Margaret Thatcher and Home Secretary Willie Whitelaw, where they discuss police requests for equipment, including the use of baton rounds, water cannons, the potential for arming police, and whether army camps should be used to detain the large number of offenders they expected to be arrested.

The documents paint an interesting if not revealing picture of unrest simmering beneath the surface of Rule Britannia at the start of the eighties. Beyond racial tensions and distrust of the police, we find unemployment, pay and industrial disputes. Militant Nationalism is Wales and to a lesser extent Scotland. Irish nationalist tensions in Liverpool and Glasgow. The rise of the far Right and neo-nazi groups. And the role expected to be played by political extremist groups, in fermenting dissent. It's evident that had the extremists, especially the Trotskyist 'reds under the bed', been better organised and capitalised on the situation, they may well have tipped the country over the brink.

But it takes two to Tango, and whilst the government discussed all potential avenues, it refused to be drawn into knee-jerk measures that themselves would undermine British rule of law and society.

These papers are available now for free download in pdf format from the National Archives and I strongly recommend you do so rather than revel in the sensationalist headlines about their contents. Unless that is, you want to use the selective headlines "Liverpool to be abandoned" as reasoning or potential scenario fodder for your own revolution in miniature.