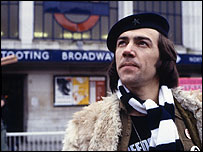 Monday, a 'Masterclass' in Coaching and Influencing, facilitated  by Peter Hill. Brilliant! I came away firing with enthusiasm and positivity.  The rest of the week did its best to knock that out of me.

My boss resigned. They aren't going to replace him which puts the long term survival of my team in doubt (again). Then my Web Developer resigned. He was offered a more secure job with better prospects, which given the current financial situation, good for him!  However it's left my project temporarily dead in the water, so I have been liaising with recruitment agencies and  interviewing contract developers to fill the immediate gap.

Tuesday, attended an impromptu party after work to thank everyone who had participated in the employee appeals process. That was seven years of my life. Some low moments in that time, but many more highs and I can honestly say I came away richer with new friends from across the organisation.

Wednesday was completely thrown out by the public sector strike. Thursday the Highlanders homecoming parade in Union Street. On the train home my airways closed up and I was left struggling for breath. Reassuringly one of my travelling companions is a nurse, just in case things got really bad. Took a steroid shot when I got home and retired to bed.  Friday was left to pick up the pieces from the week.

Maff's not had the best week either. He works for an international company, whose workload is generated internationally, so the Eurozone crisis is a more immediate threat to his employment. Neither of us in a mood for a game on Wednesday.

And still waiting for me Urban Meltdown Brits.

But despite all that, today I have taken over the kitchen and am making more of Tony's card buildings. 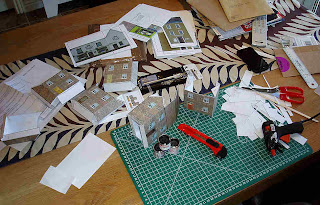 They are really fast to cut-out and construct once you build up a rhythm.  I suggest you batch them up for the hot glue gun. The fiddliest part remains as with all card kits, the chimney stack. Apart from that, they are fun to build and look good. Wish I'd come across them before I started buying Metcalfe kits.