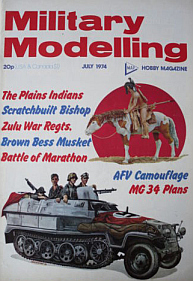 This is the first ever Military Modelling magazine I bought, way back when in July 1974. Before we get all misty eyed, I'm highlighting this issue because it has an a nicely illustrated article on Zulu War Imperial Regiments*. Very much evocaitive of 'Zulu' and in keeping with my plans to finally see the Zulu War on my wargames table in 2012.

It's easy to forget in an age of TMP, forums and blogging, that back in the 70s there were limited resources for gamers. Featherstone and Grant's books, Battle for Wargamers and Military Modelling. Finding companies and shops was a matter of scanning the small ads at the back of Military Modelling, whilst Wargamers' Newsletter was the principal source of news about new figures.

I'm taking a small sabbatical from work at a point where my project has reached a plateau and the Christmas holiday season is a convenient point to take a break and take stock. This gives me the opportunity to capitalise on my refound health and mental acuity. So I've several days put aside just for me and Winter of '79 painting/modelling.

The Urban Meltdown Brits with SLR arrived on Friday. Huzzah! Very nice figures indeed Mr Rolf. A couple more packs are definitely required! Must see if Rolf can provide some Modern Russians with ZSH1 (K6) helmets that would be easy enough to remove and use as open faced motorcycle helmets on the Urban Meltdown Brits.

With Tony's new Falklands range and in particular the Govenors Residence, I'm now regretting not buyng those painted ex-Hotspur Buzo Tactico that appeared on eBay a month or so ago. Doh! 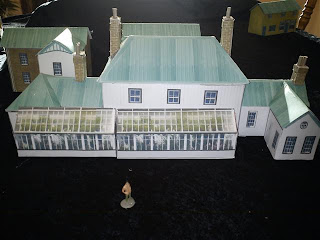 Tony's Card Models 20mm/OO
Falkland Islands Govenors Residence
However, I do have a small number of ex-Hotspur Buzo Tactico (thanks Mike!), but twelve to sixteen wouldn't go amiss. Maff will be able to pick up some more for me in Jan at Penarth (depending on casting quality) and in the meantime I'll check out the status of Rolf's forthcoming Argies.

* 2nd part of the article was in the August Edition.