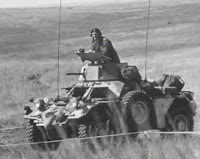 No civil war scenario set in the UK in modern times would be complete without a mention of the iconic Ferret 'armoured car'.

The Ferret was developed in 1949 as a replacement for the Daimler "Dingo" Scout car. Not surprisingly the Ferret shared many similar design features with the Dingo and is often misidentified as such. The Ferret featured a larger fighting compartment with an optional small machine gun turret. It was built from an all-welded monocoque steel body with four wheel drive and "Run flat" tyres.  The turret, where fitted carried a single machine gun. Originally a .30 cal Browning, in later models a 7.62mm GPMG. Six smoke grenade launchers were fitted to the hull (three on each side).

The first production model was delivered to the British Army in 1952 and the production ran until 1971 by which time 4,409 had been built.

It was small and robust with power, suspension and steering that gave it remarkable cross country capability. Crusing speed was 30-35mph and it could reach a 55mph on the road. It would serve with the British Army for 40 years. 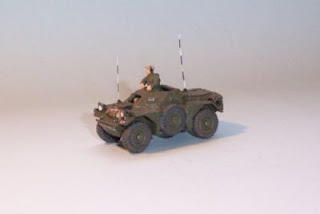 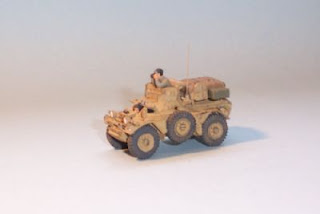 BW Models BW292: FV704 Ferret scout car Mk 1/2
Car Scout Liaison (Ferret) Mk 1/2 (FV704). Identical to the Mk 1 but has a crew of three and utilsed as a light reconnaissance vehicle in forward areas. It has an armoured roof with a hatch and is armed with a 7.62 mm pintle-mounted Bren LMG. The single-piece hatch cover opens to the rear. Periscopes and vision blocks are provided for observation by the commander. 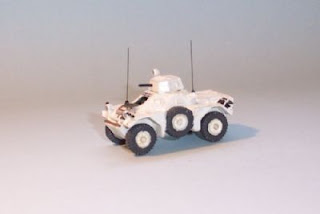 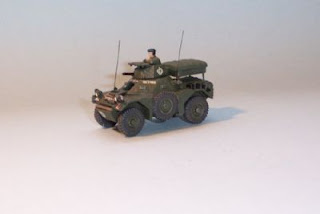 BW Models BW295:  FV701H Ferret scout car Mk 2/3
Scout Car Reconnaissance Mk 2/3 (Daimler Ferret 4x4) FV701(H). This is a later production model of the basic Mk 2 with a turret that allowed 360 degree traverse and greater elevation and depression of the 7.62mm machine-gun. The Ferret Mk2/4 and Mk2/5 are essentially a Mk2/3 with additional armour. 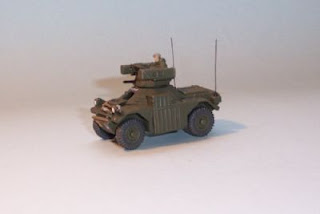 BW Models BW296:  FV703 Ferret scout car Mk 2/6
Scout Car Reconnaissance/Guided Weapon Mk 2/6 (FV703). It is a Mk 2/3 with a Vigilant ATGW in a launcher box mounted on either side of the turret. Two spare missiles are carried in place of the spare wheel. The missiles can be fired and controlled from within or away from the vehicle. They have a range of 200m-1375m. 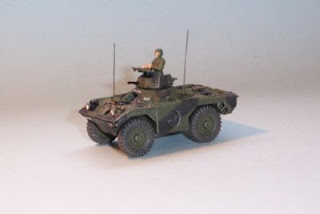 BW Models BW308:
FV711 Ferret scout car Mk 4 "Big Wheel"
The Ferret was a very successful design and is much sought after by modern civilian off-road enthusiasts for it's cross-country capabilities. They were replaced in the reconnaissance role by the CVR(T) series and Fox armoured car from the late sixties and early seventies, but many were mothballed for 10 or so years before being sold or scrapped. A number of Mk1 and Mk1/1s saw active service in the Gulf in 1991.

It was perfect vehicle for counter-insurgency operations - it's small size and unpresupposing look giving the military an armoured presence without the political ramifications of deploying 'tanks' on the streets.

BW Models produce the most comprehensive range of Ferrets in 1/76. From Mk1 up to Mk5.
RH Models (Liberation Miniatures) produce an open topped  Mk1/1 and turreted Mk2.