.
The MOD has refused to comment on the government's response to the crisis across the country. What is clear, is that it is emerging that regular and territorial army units in some areas are refusing to obey orders. Armed clashes have been reported.

The Commander of the British Army of the Rhine, Major-General Chattan Campbletown-Wingate, has declared that the British Army in Germany will continue to fulfill it's role in NATO. Columns of troops have been seen leaving London..... 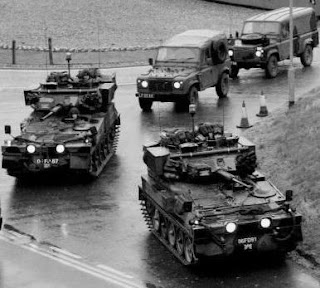 
"From our vantage point on the A40 at White City, only a mile from BBC Television Centre, we have witnessed flying columns of tanks accompanied by troops head north toward the M1 and west leaving London by the M4......"