Platoon 20 on the workbench

.
Without my laptop and the wonders of the interweb to distract me, I've completed just over a platoon worth of Government Paras - painted, based and on the table! Figures are a mix of Platoon 20 Falklands' Paras and Royal Marines, suitably painted. One section in the 70's chic '59 pattern Denison smock - as per previous post - the rest; 3 sections in DPM camo smock and green lightweights. 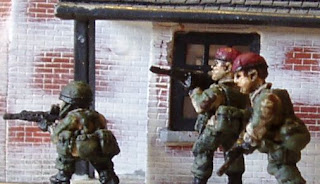 The Paras lack a platoon HQ as unfortunately there's nothing suitable in the Platoon 20 range. But here Britannia Miniatures come to the rescue as I kept a handful of the 'advancing'  Platoon 20 Paras in helmet aside for headswops. Should convert Britannia's 3 man BAOR platoon HQ (pack BAOR9) quite nicely.

With the Paras done, I've moved onto a pack of Platoon 20's Male Armed Civilians-Terrorists-Freedom Fighters 1. I've wanted these for a long time so it was easy to add them as an ad hoc pack to one of my recent orders from Tony. 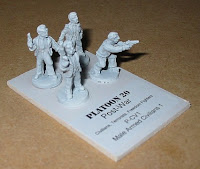 This pack is worth it within the context of Winter of '79 just for the first two minis listed above. But the other two figures, if not used for '79 will come into their own later, down Panama way, in our planned revisit to the banana republic of Costaguano. The Platoon 20 guys unsurprisingly compliment Combat Miniatures Plain Clothes Detectives  and Criminals/Terrorists. Will definitely get a second pack.