.
If you thought para-military organisations and uniforms on the streets of mainland Britain were something only possible for the pre-war era you'd be wrong. I followed up Maff's superb post, How Green Was My Dropzone, with some rough and ready research on nationalism in the sixties and seventies with an emphasis on militant Welsh nationalist organisations.

The Free Wales Army (Welsh: Fyddin Rhyddid Cymru), FWA, was formed in Lampeter, Mid-Wales in 1963, with the avowed objective of bringing about an independant Welsh republic. The FWA had a full rank structure, uniform code, rank badges and decorations. An interesting article can be found at WWW.Welshicons.org.uk. The BBC also has some footage of the FWA (click on the link to play). 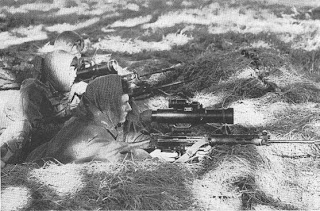 The 'Viet Taff'
Armed with weapons donated by the IRA, they had 200 members attending training camps. About the same time the Mudiad Amddiffyn Cymru (Movement for the Defence of Wales) or MAC launched a series of bombing attacks. On the eve of the Prince of Wales' investiture in 1969, two members were killed when the bomb they were planting on the railwayline used by the Royal Train exploded prematurely. The leaders of both organisations were jailed by 1970. 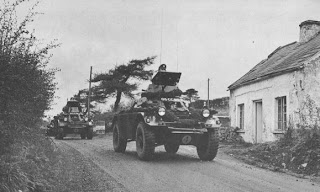 Government patrol pushing west of Carmarthen
The seventies saw the FWA and MAC being succeeded by nationalist movements such as Meibion Glyndŵr (Sons of Glyndŵr) Mudiad Amddiffyn Cymru (the movement to defend Wales), Cadwyr Cymru (the keepers of Wales), The Welsh Army for the Workers Republic  (WAWR) and Welsh Socialist Republican Army (WRA). One or more of these took part in bombing campaigns in 1979-80 and into the early eighties.

The only similar militant/para-military movement I could find in Scotland at this time is the Scottish National Liberation Army (SNLA). The SNLA were formed by Adam Busby, an ex-soldier following the poor results of the 1979 devolution referendum.

So, there you have it. A rich seam of nationalist para-military undercurrents in Wales for you to exploit in our Winter of '79 scenario. Do the FWA and MAC "rise again"? Will the nationalist para-militaries co-operate or impede each other as the anarchist factions did during the Spanish Civil War? Lot's of potential to play out Winter of '79 with small forces and minimal outlay on vehicles and terrain right up to a full nationalist resurgence and uprising.