.
Had a great day at SKELP wargames convention held in Forfar yesterday. Forfar is a 20 minute drive away during which I pass three Roman camps, the battle sites of Inchbare 1130 AD and the famous dark ages battle of Nechtansmere 685 AD. 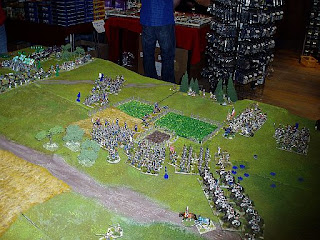 pic of a game at SKELP 2010
SKELP is a small show, held in the easy to get to and well located venue of Reid Hall. The Angus Wargames Club guys are always really welcoming and helpful, which gives it the ambience of just being an extended club night. The Bring & Buy for me personally was the best ever of any show.

Highlights of the day? First, meeting up with my good friend Cate Adams and hubby Dave.  They are really good people, whom I like a lot and am honoured to know. Turns out Dave had stumbled upon Winter of '79 but didn't realise it was my blog. So after a mooch round the traders stands we swapped 1970's army 'war' stories over a cuppa from the 'Field Kitchen'.

Second, chatting with Dave from Xyston (Scotia Grendel) and being introduced to (Rev) Allan Webster of the Angus club.

Third, but by no means last, having a good natter with Martin from Warbases.co.uk. All my figure bases are bought  from Martin as he is a real gent and a pleasure to do business with. I use 20mm diameter 2mm deep round MDF bases for both my 15mm and 20mm individual figures, 30mm for GPMG teams & support weapons etc.

Warbases has recently released a range of flat pack 28mm MDF British red-brick buildings suitable for VBCW. In addition he has made some beautiful 15mm Normandy houses that haven't made it to the website yet. Thoroughly recommend them! 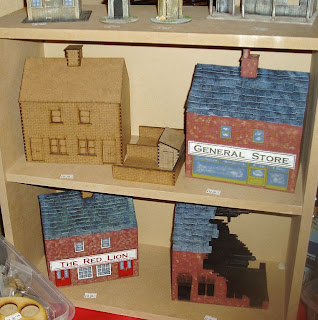 Warbases.co.uk VBCW Buildings
Martin showed genuine interest in Winter of '79 and would be happy to recreate these models in 20mm for us. He designs and produces all his own products so is easily able to meet any realistic customer request. I'm going to send him some further designs of my own - let me know if you are interested but please do also contact Martin and mention this blog if you think you may be in the market for Cold War British mainland or German (NATO Central Front) 20mm buildings. 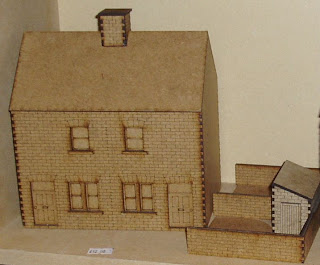 Red-brick terrace with gardens and privy/sheds
Finally, Martin has also agreed to make me some irregularly shaped movement trays for 3 and 4 figure fireteams. Watch this space!

Before I finish, I must mention Mutineer Miniatures. Nice guys to talk to, with a good range of scenics and accessories over and above their cracking 28mm Indian Mutiny figures. Consequently I spent a good proportion of my cash with them. Mostly on a variety of  MiniNatur Silflor autumn/winter countryside grass 'tufts' which came in the original mini pack protective boxes for just under a fiver each. Another trader at the show was selling Silflor in ziplock bags but it just looked squashed and flattened. I also bought Mutineer's show stock of  'plastic' deciduous trees. I recommend them as good looking and sturdy budget tree models. Check them out on their website!

Targe 2010 is in a month's time and held only a few miles from Forfar at Kirriemuir. Looking forward to it!