South Georgia, April 1982. British arctic researchers and naturists are held by Argentine Special Forces at the old coaling station of Penguin Inlet. With all attention on Grytviken, a scratch team of SBS/SAS troopers and a platoon of Royal Marines are tasked to "get the bloody Penguin twitchers out and don't let anyone slot them."

The SAS / SBS land at dusk and observe the settlement; the Marines are delayed by strong currents and engine trouble, with dawn rising and the Marines slogging up the far side of the Glacier, Sgt Chaz tells his 7 lads - "let's just f**cki*ng do it." 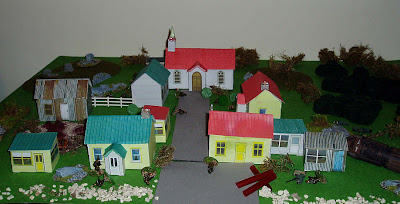 They divide into two bricks - Sgt Chaz and troopers Gaz, Daz and Baz going left and Sgt Mike, Jake, Stan and Goffy going right; each brick has M16s, a M203 and a couple of LAWs. The first buildings are empty. The next, to judge by the empty tins and a grimace from Stan, are occupied.....an Argie steps out of the right hand shack, goes to call an alarm and is dropped. It all goes loud as 203 rounds thump into the shacks, followed by M16 fire. The buildings are clear. Mike's brick pushes up to the house adjacent to the slipway and spot a clutch of Argies over the road; they open fire and drop the Argies but Mike goes down. Meanwhile Chaz's brick is up to a small shack on the road, Baz and Gaz break left to move up to the house next to the Church......"Action LEFT" as a squad of Argies bundles out, firing...."ACTION FRONT!" as FNs are poked out of the windows of a house over the track. 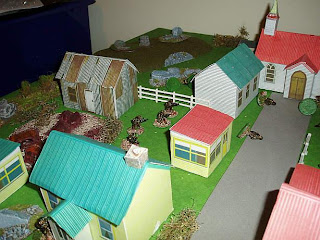 The entire settlement is engulfed as the Brits put out fire. The Argies to the left are grenaded and scatter but a stray round drops Daz; Baz puts some down range but a rife grenade goes off far too close and he's down too.  Mike's brick is under fire now with Goffy put out of action.

Its looking a bit tight for the SAS/SBS but Chaz unlimbers a LAW and fires it at the house across the road - demolishing the chimney; its followed by some 203 rounds that rattle the windows. Doors are slamming and some Argies run towards the church - are they going for the civvies? They get dropped. 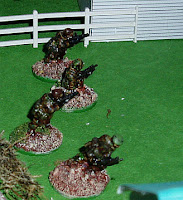 Mike is cut off from his guys as they are on the other side of the shack putting fire down the road - he slots a couple of Argies across the slipway and ducks back head ringing from a grenade. Shaking his head, he gets the M16 online and drops two more Args. He steps back into a porch and covers the right flank.

While everyone else (about two blokes in all) put out covering fire, Chaz leads Gaz in a looping run around to the side door of the church...."BRITISH ARMY!!".....size tens are applied to the door which is stuck firm. Cheers and singing of Rule Britannia are heard from the church as the door gets another good kicking but succumbs to a pew wielded by some large Arctic Survey lads. 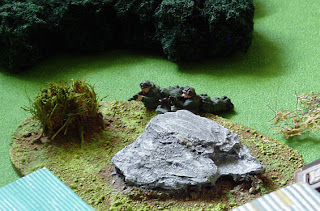 Bullets rip into the settlement as an Argie MAG MG up on the hill opens up. Its a long shot but Jake cycles his 203, raises the M16 and plonks a grenade onto the gun team. The civilians pour out of the church and are ushered to cover; its all oddly quiet. The troopers scout around quickly and help their wounded up and away. Sgt Chaz gets on the radio "Penguin One Alpha to Penguin Actual. We have run out of Argies. Out."

Game hosted and run by Mark, played with a liberally interpreted Voyages Extraordinaire from Wessex Games.