Second order of MJ Figures new 20mm Falkland 1982 figures have arrived together with some samples of forthcoming figures that Mark kindly sent me to share with you. 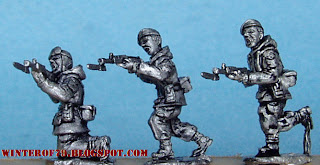 Mark tells me his new 20mm Falklands 1982 range will begin by mirroring the existing 15mm Falklands range - Paras, Marine Commandos, Guards/Gurkhas, SAS/SBS, Argentinian troops. Then expand to include heavy and support weapons, plus extras such as Rapier and the Gemini assault boat.

The British packs will be available in berets, M76 Para helmet, MKIV/V 'turtle', cold weather caps (photo: bottom left) and I've suggested a few in knitted woolly hats too. Two packs of berets (BF01 and BF02) are available now. The Para helmets have a mix of DPM covers, netting and scrim/foilage. Cold weather caps are modelled both with ear flaps up and down.

Got to say I am increasingly impressed. Both by these miniatures plus Mark's enthusiasm for the period. The quality of the sculpting and detail equals many 28mm ranges. They scream to be painted - now, now, now! Best of all, the poses by and large have a dynamic realism and they capture the feel of the Tom from the Cold War era.

Am I excited by the new Falkland figures from MJ? Maybe. Inspired? Definitely.