Mark from MJ Figures sent me this taster of his upcoming 20mm Argentinians for his Falklands 1982 range. Over the phone, Mark told me about the support weapons including mortars and recoilless rifles plus a range of resin dugouts he's had created specifically for this range.

I also received a couple of samples of new British Paras from him, tucked in with an order. They are both bareheaded and wearing helmets (photos to follow). The bareheaded Tom is particularly good makes a nice character figure! All in all this range is shaping up nicely. 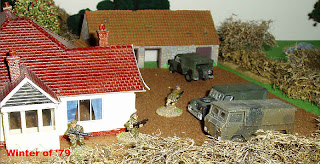 A Free Wales Army raid on a Rupert billet in Monmouthshire

A quick SITREP at this point won't go amiss.  The recent downpours in the south of the country have left Maff with the unenviable and costly task of stripping back his interior walls and flooring.

After final effort, I have all the Land Rovers I need - well, almost. Long Wheel Base, Short Wheel Base, 1 Ton and Airportable. A couple are in Berlin Brigade schemes for 10 Field Force, who are going to have a more urban role going forward... fires on "the mersey and the thames and the tyne..."

I've been focusing on course work for some professional exams coming up next week. Bearing this in mind, I'm in 'lockdown' from now until Friday 22nd, when I hope a big celebratory drink will be in order. See you then!