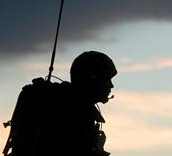 The head of steam I had built up early last week was brought to a halt on Wednesday when Heather was made redundant.

22 years with the same company. A job she loves and is dedicated to, is now, for all intents and purposes over. The team she has built and nurtured, the friends that make her job so enjoyable on a day to day basis - all to go.

Regardless of being change managers ourselves, the effects of change, that sudden painful "What now?" reality check, is inescapable. Yes, you can be better prepared, you can understand how it will impact on you, how you will go through phases of emotional response etc, but you can't escape it.

Believe me, we are in a better position than many in a similar situation, so we aren't complaining. Funny thing is that I had the redundancy axe hanging over my head for two years and then 18 months of the threat of outsourcing, which I grasped as an opportunity. And that's where we are now. We may need to sell up, downsize, move in with her father, relocate entirely, or a combination of all these options. Whatever happens going forward, we have been given the impetus to review our combined skill sets and make sure we utilise them fully. This may take the form of multiple income streams to give us some protection against the winds of economic downturn and change. Who knows, Winter of '79 the 3 part ITV mini-series may now become a reality!

I am back at the paint-front today. Perhaps it's symptomatic of my inner feelings, but I'm building an Airfix Chieftain to turn into a wreck as W'79 scatter terrain. I've just been rusting up this old Airfix T34 for our Bakonga games as a test piece.... see the photo below. 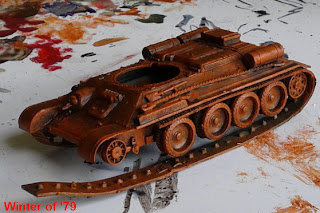 Both tanks are going to be mounted on Laser Cut Terrain Templates from East Riding Miniatures. I've got one template prepped with the first layer of basing material drying before I fix down the T34 hull. These Terrain Template packs are cracking good value, especially the medium size, and I thoroughly recommend them. ps (T34 largely complete now).

Been discussing rules with Maff and I really want to stick with Cold War: 1983. Most of our face to face gaming is done via Skype these days and we often have strict time limits of an hour, hour and a half, including chat and any show and tell.

Rather than limiting our hobby, the reverse is true. We specifically focus our games to maximise these windows of opportunity and are specifically targetting our figure and terrain collections to support this.

So, why Cold War: 1983? Well, we know the system inside out. We rarely have to refer to the book at all, so game play can zip along. Plus it's a versatile system and very easy to incorporate your own ad hoc mission/scenario specific rules.

It's not that CW:83 are necessarily better than any other rules, just in this case better suited to our current game play and the constraints we face. So I've formalised our game play with Cold War: 1983 into three distinct styles.

For small games, no more than half a dozen figures per side, we play the rules as is. Full granularity. We call this CW:83 CQB.

For Call of Duty: Modern Warfare/ Ghost Recon inspired games we have CW:83 Gaz's Rules. In this house variant, the SAS or other Special Forces figures are considered First Person Shooters (FPS), whilst any supporting troops and enemy forces are largely dealt with as fireteams, though there may be the odd FPS enemy sentry, leader or "boss" figure. In other words the enemy fireteam plays as a single entity.  This harks back to the 'Goon Squad' rules Maff originally conjured up in Cross of Iron.

For larger games, 3+ fireteams each, we have a further house variant CW:83 Fireteam. If you've played the video game  Full Spectrum Warrior, you'll understand where we are going with this. Here leaders lead whilst fireteams move and fight as a single element. Im just now adding in some ideas that have come out of gaming Force and Force and Hell and Uncivil Disorder to make CW:83 Fireteam sharper and a bit slicker for Skype play.

I should add that Maff and I have known each other since the early nineties. For us the game is more important than winning or losing, and sometimes we smooth game play for the sake of a fun game. We regard rules as an enabler rather than being simply immutable laws. But, it's still important to us that combat outcomes make sense and have logical results.

Apart from finishing off  miniatures I started last week, what's on the menu this week? Highlighting and bushes/tall grass clumps on some rock formations I've been painting for the Falklands, some distressed buildings.... but Land Rovers mostly.The aim is to complete four by the weekend. Six if I can get some bandage for camo nets.