On a parade ground somewhere near Fort Benning........

"Rangers, as you know, Operation Prompt Anger has been authorised by the President.

Amongst the mission targets is the local radio station at Santa Maria dos Los Paraguayos. The station is located at the end of a street forming a T junction; it is adjacent to the local school and so we are unable to seize it by a direct assault. Instead Bravo Chalk will rappel from helos at the end of the street and move onto the objective with speed. Alpha Chalk will provide LZ security. Local resistance is however expected to be light.

Several hours later in the Caribbean.... 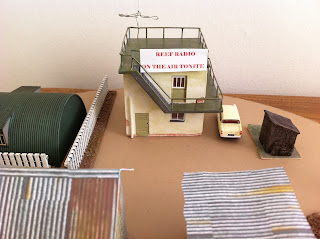 But something else is in the air...﻿

"This is Mother Hen, negative Chick One slated to land first over"

"Chick Two here, we are off course, ETA 2 minutes over" 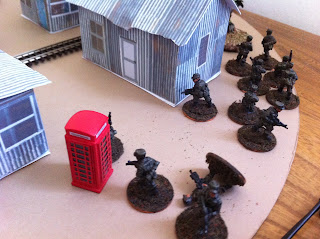 Despite the confusion both Chalks land and form up but.... 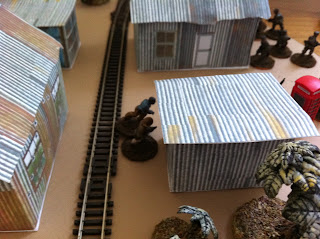 "Eyes up! Nail that sniper! This is Alpha, under sniper and small arms, targets moving on our LEFT!"

"BRAVO! Move up, get over the railway tracks!" 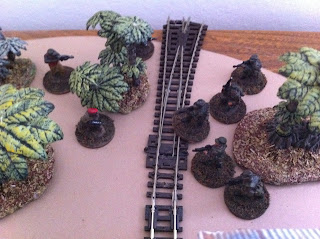 Bravo engaging enemy infantry on the wrong side of the tracks

"This is Mother Hen, we are holding LZ but Bravo stick is heavily engaged on the right flank over"

"Move up ! We are Oscar Mike at the edge of the shacks. Enemy infantry ahead!"

"Don't these guys give up?"


"We can enfilade the DUSHKA! Go Go Go!"

"This is Alpha, enemies to left neutralised , we can see Bravo at the radio station."


"Man down! Alpha! All eyes for that sniper!" 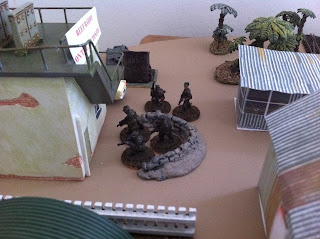 "an dat was Prince Buster, an it's a fine morning with Reef Radio....WHAT? An deres a helicopter outside an guys are sliding down ropes BANG Leroy, catch that WAILERS disc, it's signed! An theres shooting in the street, in the bush an BANG there goes mantovani....no real damage eh Leroy.....? An dere's more shooting....."

"Hey I'm de DJ, you got a request, you PHONE it in like anyone else!"

"This is BRAVO, target secured, wait up. SMITH! check the windows! What's that noise?" 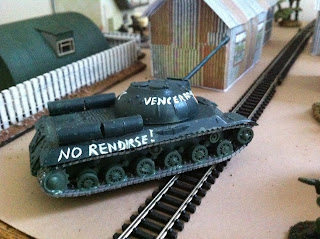 "Cuban armour! Approaching up the railtracks!"

Costaguans - assorted militia, DUSHKA and sniper (in the power units on the station roof) - regulars.


﻿Figures - Hotspur (dushka Pltn 20), tank - AIRFIX, terrain, you've seen it all before amigos...
Rules, CW83 with even more mango and a hint of rum
Cheers
Maff