Freikorp you know the score! 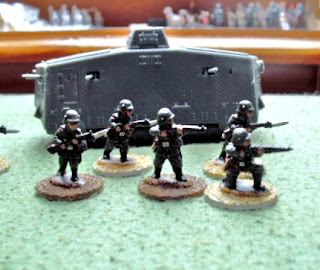 Remember back in March I mentioned I had started a new Freikorp project? Well I made quite fast progress and have finished enough figures for a few units.I just need to finish the bases, paint on loads of swastikas and do the heavy weapons. I also need to think about the opposition. I don't want the Freikorp to fight other WW1 Germans as it would look too boring. So I was thinking maybe some armed sailors or civilians. One of the guys in the club has a stash of German model railway building so I can see this becoming a game pretty soon. 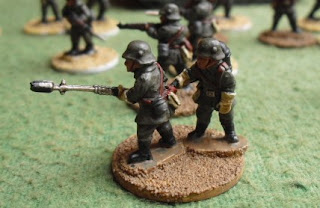 For rules we will use our ubiquitous 38 rules adapted from  the Foundry Old West set. They give a simple fast game and stats are available online for just about every AFV of the era. We actually used these rules for a 79 game involving geezers, terrorists, armed police and army patrols and they worked very well. You just have to keep things simple.