Ted Povey is an ex-RASC corporal who runs the Nevilles Cross Garage in South-East Borset. The area is "quiet" and has gained a reputation as a cushty number by govt forces; a daily landy patrol does however go past the garage. The squaddies have learnt that Ted is sympathetic and a good stop for a fag break (petrol pumps are defunct and a targets for local kids with air rifles) and a real cuppa while the radio is "tuned". 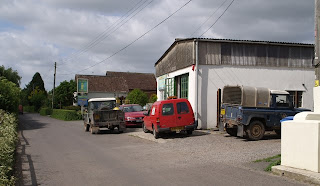 Aware that recent failures mean that a success is vital, the Clash Action Brigade has put a team together to ambush the patrol at the garage. Following limited training received by Free Taff/PIRA cadre (before they were slotted by the SAS). A more organised structure is now in place, an armourer has stashed three SLRs and a Sterling along with some red berets; these have been collected and the ASU has simply walked across country mimicking an army patrol, to the site of the garage - in a mix of commercially available DPM gear they pass muster at a distance as a small Para patrol. They are now in position at the site.
The first army landy has puttered  up and while the gun bunnies in the back are stretching and lighting up, the radio bloke calls in "One Four, radio check, over....." The second landy stops briefly and the driver leans out "Bob wants a Wagon Wheel. We'll pop down the shop and be back in five." Ted has the kettle on.
In cover, a nod and the safeties are thumbed to OFF. Power to the PEOPLE!