This is My Manor

I spent Saturday looking at older industrial estates using Google Maps Street View - and drew up some rough building designs and site plans.  On Sunday, I had a bit of a nostalgia trip and took a look around some of my old haunts across London. Bingo! 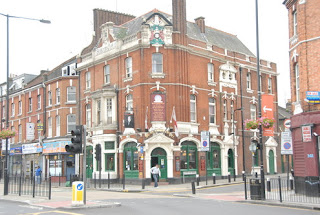 A composite image formed in my head of a generic inner city urban area that wasn't just row houses with backies and the odd corner shop. Using the Pub from the Metcalfe Low Relief Pub & Shops as the centrepiece - renamed The George, "a wretched hive of scum and villainy" - I envision a nucleated high street junction with a couple of streets leading off, providing a Hollywood style urban back lot for Geezers, Winter of '79 and the odd Zombie game. 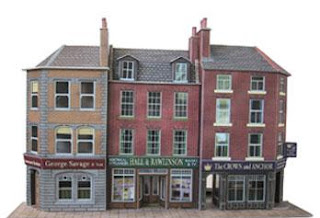 Phase 1 of my new 'manor' will be created from off the shelf Metcalf buildings; with a little kit bashing here and there. For instance, two sets of PO205 Low Relief Pub & Shops will allow me to give the George a second facet and an extra shop and a Post Office. The Three storey tenements and two storey shops will be easy to construct and allow us to play a game or two centred around this small area. Rememeber that we are talking individual/character skirmish games - mostly shootouts and blags. 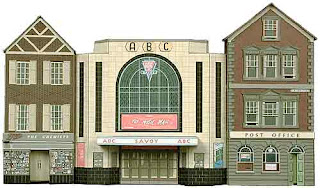 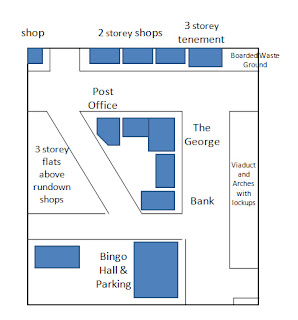 East Whittington 'Manor'
Not to scale
I could mix in an old warehouse with the 3 storey shops/flats - maybe turned into a dodgy club or strip joint? Another option would be to swop the relative locations of the viaduct/arches with the tall shops/flats/tenements proposed on the left hand side of the board. This will turn the area behind the Bingo Hall into a seedier district. I'll play with those options once I've got the buildings for phases 1 and 2 completed.
I did seriously consider the Scalescenes downloads but they have to be printed, then cut and finally glued to card before assembly whereas the Metcalfe kits come printed and pre-cut. Less versatility yes, but Metcalfe are less fuss, have less chance for error and should be a quicker result on the table. And more importantly, more likely to get of the ground. I can pick up the Metcalfe kits this week.

So, I think it will work without becoming stale. What do you think?