Something for the Weekend Sir

Rolf  hopes to have pack URBMELTSLR (10 bareheaded civilian figures with SLR) in the mould this weekend. They are in the second batch to be made, so even if he can't manage this week, they will appear very shortly. It goes without saying that we are really looking forward to these miniatures as the backbone of our organised resistance along with the Urban Meltdown Support pack released during the summer.

Rolf is a good bloke and moved the URBMELTSLR production up the queue deliberately to aid our efforts on Winter of '79. So please support him in return and buy a pack or two yourselves.

I have to admit that those TQD Falklands British released back in August by C-P Models have been calling to me. I keep revisiting the pictures of them and am finding them hard to resist. In all probability due to the nature of the games we've been playing recently. Rural encounters between small groups of figures. Plenty of Spec Forces action and more to come in the next few weeks.

Add to that, I sent Mark at C-P Models an email query. He responded early the next morning and proved to be a real gent into the bargain. My great demon is over analysis. And anything that helps me narrow down options, like a manufacturer responding to my queries, so I can make my choices and spend my money and crack on, gains my support.

When I originally envisioned Winter of '79, it was going to be a discrete side project with a platoon's worth of Britannia Cold War BAOR Brits as the government regulars fighting ex-Hotspur (aka Combat Miniatures) insurgents and rebel army forces drawn from the Operation Corporate and Urban Operations ranges. Well, we can all have dreams!

If I was starting again today from scratch, same brief as before - discrete and small scale project - then in order to save myself tears of frustration and get off to a running start, with games in the bag, I'd simply buy a pack of  the TQD-MF1 SAS, one to two packs of TQD-MF2 British Army Infantry.

Why? Life is complicated enough! On reflection, the TQD  figures have the right cold weather 'sleeping rough in the field' look I wanted for Winter of '79, the separate heads provide variety and personalisation, the separate bergans allow further choice. Plus I can see pics of what I'm buying (which is important so that I'm able to visualise how I will convert/use the figures and whether I need to up the order to get more of a specific miniature etc), then purchase online painlessly via paypal. Done!

A couple of Airfix Land Rovers, a Scorpion/Scimitar or two, a Saracen; all picked up form the local hobby store. Gaming ahoy! And plenty of potential for expanding later on with the help of Shaun (S&S), Tony (Platoon 20) and Rolf (Liberation Miniatures).

Looking ahead to some more future releases, you may be interested to hear that I emailed Brian at Hobby Den recently. It was on a Sunday and I wasn't really expecting a reply till Monday, or more likely Tuesday. Nope, he responded later that same Sunday afternoon. Definitely impressed! Brian hopes to have a 1/72 Shorland armoured patrol car and Saxon APC ready in October and an SAS 'Pinkee' Series IIA available around December or shortly afterwards.

We also talked through options for an urban tabletop, but have to admit that we are struggling to come up with a cost effective and versatile layout that isn't Metcalfe/Superquick brick terrace. I'm currently erring on an industrial estate as an interim solution for both Winter of '79 and associated Geezers games. 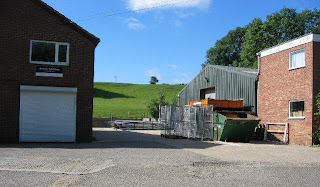 In part 'cause that's where most of the action in The Sweeney and The Professionals seemed to have been filmed and therefore nicely atmospheric for Winter of '79. But on a practical side, commercial/industrial terrain can stand alone or provide a transition piece from countryside to suburban residential housing or terraced inner city. It can also be put together and rearranged at will like a Middle East 'city' tabletop.

There was an industrial estate near me when I was a kid. Flat roofed 2 and 3 storied offices attached to two, three medium sized sheds or a single large warehouse. Plenty of roads and alleyways to duck down. Yards full of pallet piles, cable drums, containers. 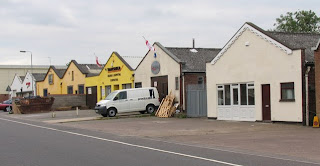 The industrial estate can be as big or small as you want and you can mix and match architecture without it looking odd. Parked lorries, delivery vans, portakabins, skips and burger vans can all add to the visual and tactical impact. Add a couple of Dapol cranes and you have a docks or railway goods yard! 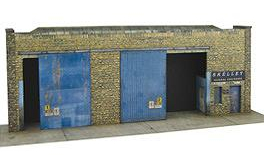 The simplicity of the buildings also make a good test bed for scratch-building your own and ScaleScenes have a free downloadable Low Relief Warehouse to start you off.

Have a good weekend!