In September 1975, the BBC's Panorama takes a look inside Sandhurst. We find the then officer cadets preparing for a Winter of '79 scenario on the streets of Britain under no less a tutor than Brigadier Frank Kitson. 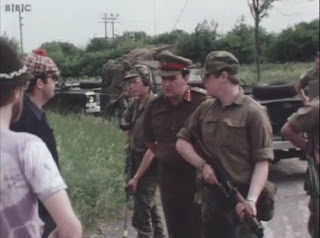 Winter of '79, courtesy of Sandhurst in 1975
http://www.bbc.co.uk/programmes/p00kfytm
The documentary was aired a just over a year after the Miners Strike, the three day week and Edward Heath asking "Who rules Britain?" Almost 3 million are unemployed. Chief Constable David McNee, warned the government that if shipbuilding on the Clyde went under, he would need 15,000 extra police officers to cope with the resulting civil unrest.


"Filmed at the height of the troubles in Northern Ireland, this programme offers a fascinating insight into officer training. Six years in Northern Ireland have given the British Army unique experience in counter insurgency and internal security techniques. Sandhurst recognises that the Army's Ulster experience could - one day - have to be used in Britain, and there is a need to train officers for that possibility. So imagine a world where Scotland has left the United Kingdom, where some English cities are thinking of following suit and where law and order is breaking down in our towns. It may seem far fetched, but the recruits of Sandhurst are presented with just such a scenario."

An impressive historical document of the time. Available to watch in full on BBC's iPlayer.