Borchester Abbey has stood since the Norman Conquest. Originally built on the Borchester pilgrim route and was said to house the bones of St. Brigelda, it became a rich source of income for the church. Burned during the Welsh Wars of Independance it was rebuilt only to be burned again and denuded of its status during the Reformation. 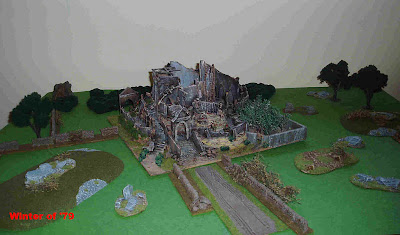 Borchester Abbey
Today Borchester Abbey stands an imposing ruin, which in good times sees thousands of visitors every year. It's views across the Borchester Vale making it a must for family picnics, ramblers and illicit lovers. 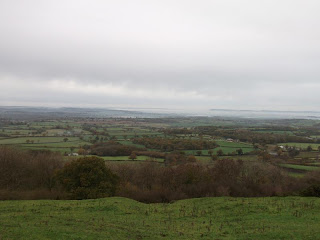 The panorama has not been lost on the government forces, who aim to build a permanent watch tower adjacent to the abbey. Fairchild Building and Construction of Felpersham have been given the contract to erect the tower and protective compound.

Don Clough and two of his foreman from the Borchester office will be meeting Captain Porter, Royal Engineers at 11am on the 7th to agree final plans before work commences.....

01:00 hrs, 7th; the Ops Room of C Company is instructed that a 10km square grid reference centred on the Abbey is a 'No Go' Zone. A scheduled patrol is scrubbed and the covert OP in the area told to stand down. A voice in a hedgerow, quietly mutters "Bloody SAS!"


Game set up and ready for tomorrow night.
Posted by Mark at 17:54