I'm going to stump up for a handful of 20mm VBCW Armed Police from Irregular Miniatures.  The ones in cap might also just make interesting armed Traffic Wardens, Ministry officials that sort of thing. Will see if I can turn one into being armed with a Sterling for Maff.

The armed Traffic Warden makes an iconic statement about the breakdown of urban society. A perfect figure (or two or three) for your Post Nuclear Holocaust, Zombie Virus, Urban Meltdown. They can be mixed in with civilian survivors, militia, to add colour, or be government auxiliaries in formed units in their own right. 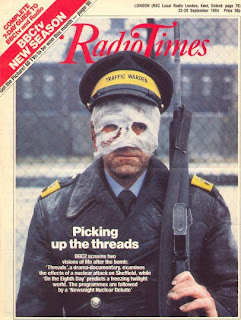 Sgt's Mess have a 20mm WW2 'Authorities' set which includes a Policeman, WPC, ARP Warden and Vicar. The WPC just needs a small adjustment to her cap. The Bobby will do, once painted dark blue the difference in details will be insignificant. The Vicar, er well, remains a Vicar (perhaps converted to CND supporter/clandestine Trot). The Warden figure in WW2 Tommy helmet reminds me of the Civil Defence Wardens in The War Game (1965). Could keep the helmet as is or give him a head from one of my Eureka riot troops and use him as a militarised Traffic Warden, Church Police (a la Tom Robinson Band) or other similar auxiliary government official.

Bandera also do a pack of 5 SCW Asaltos in jackets and caps - may work - need to ask Rolf.